This and That: filled with gadgets, alcohol and an advent calendar literally filled with diamonds 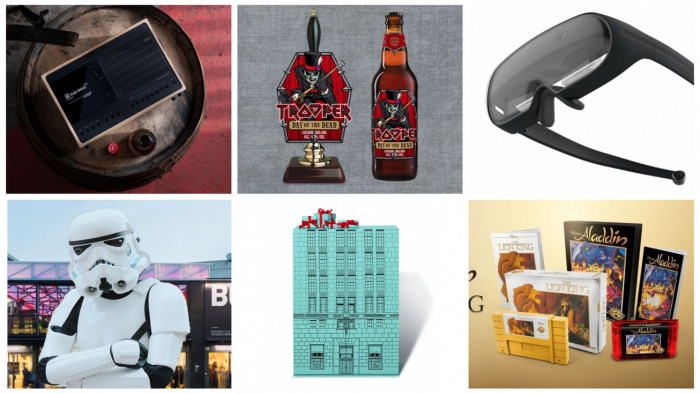 Another week has sped by, and you’ve probably done very little more than glance at the news.

Don’t worry, that’s literally what this round-up is for. We’ve searched high and low to find you the best news stories of the week.
From entertainment to tech, here are the ten stories we could not wait to share with you.

Scottish Brewery Innis & Gunn has teamed up with audio experts Revo to make a DAB radio out of old beer barrels. The radios celebrate ‘The Original’ bourbon barrel-aged beer and each one is unique due to natural variation in the wood grain. The design features a black anodised aluminium front that contrasts with the light grain of the oak barrel staves. The radio is priced at £499.95 and is available to buy from the Revo website now.

Read: Craft beer radio anyone? It's time to swap ABV for DAB

Tiffany & Co launched an advent calendar this week that put all others to shame. Filled with gifts ranging in price from £100 to £13,000, this calendar means business. Gifts include diamond pendants, the new Tiffany 1837 Makers watch (worth over £3k) and jewellery from the Tiffany T collection in which rings begin at £335. Only one of the two calendars on sale is available in the UK, and it will be on sale at Harrods from 9 November. Oh, and it’ll cost you £104,000.

Disney’s Aladdin and The Lion King video games are getting a retro-style reboot, as Nighthawk Interactive and iam8bit are releasing new physical cartridges for the games.The Lion King collection is made specifically for SNES, while the Aladdin Legacy Cartridge will be for Genesis. The fully playable cartridges come in two colours for each game chosen at random. Pre-orders for the collections are available now on the iam8bit website. Though, it's worth bearing in mind that the collections won’t likely be shipped until early 2020.

Read: These retro Disney game cartridges are the 90s nostalgia we didn’t know we needed

In a week where Apple’s AR headset was rumoured to be released in 2020, a design patent for some Samsung AR glasses has also been unveiled. The application, which was originally filed in February, was made public this week in South Korea. It includes a 3D render and illustrations which seem to show a camera for each eye and a cable running down one arm. There also appears to be a small speaker, or it could be ventilation holes. Either way, it’s pretty exciting as Samsung hasn’t released a new VR headset since 2017.

We’ve seen leaked photos of Adidas’ new Star Wars collection and it looks pretty darn cool. No prices yet, but we have seen R2-D2 and Stormtrooper versions of the Nite Jogger, and the Pro Next 2019-style with ‘Light Side’ and ‘Dark Side’ graphics on each side of the shoe. This is in addition to the Star Wars-themed Ultra Boosts that were revealed last month. The collection is expected to be launched on 1 November so keep an eye out to see the full collection.

Iron Maiden has launched a limited-edition beer just in time for Halloween. Trooper Day Of The Dead has been created in collaboration with Robinsons Brewery and will be available until the end of November. On the label you will find the band’s mascot Eddie, and the flavour of the beer is meant to be similar to the band’s original Trooper flavour, which was launched in 2013.

This Larq bottle cleans itself at the touch of a button, using UV light to combat the growth of e-coli and other bacteria that love to live inside your water bottle. And, it’s just been awarded Best Product at the Dezeen Awards 2019. It also has a vacuum sealed double-wall so that it can house hot drinks as well as your standard water - perfect for these colder winter months. The tech does make it a little bit pricey at £95, but it is powered by a rechargeable battery and USB-C port so you should be able to use the bottle time-and-time-again.

Read: This self-cleaning water bottle battles bacteria at the touch of a button

That LOTR casting of Game of Thrones star

The new Lord of the Rings TV series has found its villain in Game of Thrones star Joseph Mawle. Mawle, who played Ned Stark’s uncle Benjen is set to play the series “main villain”, a character called Oren. Other cast members include Will Poulter (from Black Mirror’s Bandersnatch) and an actress Markella Kavenagh. The series is still very much in early stages so don’t expect too much to be revealed in the near future. Amazon Studios has suggested it could be 2021 before we see anything from the show.

Read: The LOTR TV show just cast this Game of Thrones star as a villain

Ember has created a mug that will keep your tea the perfect temperature all-day long. Users simply head to the Ember app to set their desired drinking temperature, where they can also a number of different temperature pre-sets depending on whether they’re having tea, coffee, hot chocolate etc. Without the charging coaster, the mug lasts a decent 80 minutes, but with it, it can last all day. Prices start at £99.99 for the 10oz size, you have the option between white and black ceramic.

Read: This mug will keep your tea the perfect temperature all-day long

There’s a pop-up in east London selling all things Stormtrooper. Located in Shoreditch’s Boxpark, the store contains everything you did not know you needed - from a Stormtrooper cheeseboard to a full set of battle armour. You’ll want to head down there ASAP though as it’s only around until October 27.

Read: London’s Stormtrooper pop-up lands ahead of The Rise of Skywalker