There are retro cases for the remastered Nintendo Switch versions, too. 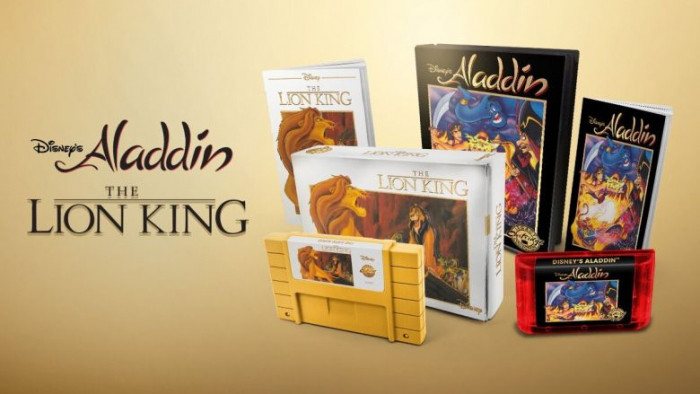 Everyone has those games that just *were* your childhood, and what better way to relive that nostalgia than with some classic Disney movie tie-in games.

Disney classics Aladdin and The Lion King are getting all the retro love as Nighthawk Interactive and iam8bit are releasing physical cartridges for the games.

Unfortunately, iam8bit says there is no way to guarantee you’ll get an ultra rare colour as the packaging is random, with not even their own staff having influence over which cartridge they get.

There are only 4500 copies of each collection up for grabs and the limited edition Legacy Cartridge Collections will cost $99.99 (or approx. £80).

If fancy getting hold of the games, but with a smaller sprinkle of retro, then you’ll be happy to hear that there are also Retro Editions of the games for Nintendo Switch.

For $49.99, the game will come with either Clamshell Style (Genesis) or Boxed with Tray (SNES) classic console-style packaging, along with a retro-style manual and poster.

This is in addition to the recent news that the games are being released on PS4, Xbox One, Nintendo Switch and PC on 29 October ($29.99). They’ve really tried to cover all possible options with this one. The cool thing about these games is that you can switch between upscaled and original graphics.

Pre-orders for the Legacy Cartridge Collections will be available from 6pm today (10am PDT) on the iam8bit website. Though, it's worth bearing in mind that the collections won’t likely be shipped until early 2020.