Direct from stage to brewery. 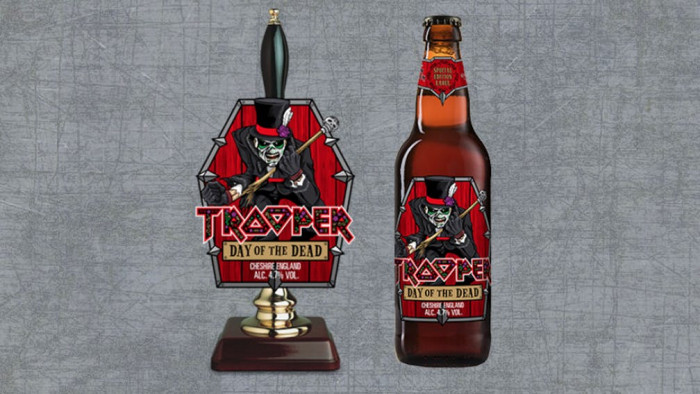 If you’re a music fan who worships at the altar of heavy metal and can’t be seen in public without wearing some kind of band logo, then this alcohol-related news will be music to your ears. Iron Maiden fans rejoice, for the band have launched a limited-edition beer specifically for Halloween.

Named Trooper Day Of The Dead, the beer has been created as part of a collaboration with Robinsons Brewery and will be available from now until the end of November. Y’know, just in case you needed another excuse to celebrate all things other-worldly.

Emblazoned with an image of the band’s mascot Eddie, the label is a nod to Mexico’s Dia de los Muertos - otherwise known as ‘Day of the Dead’. The band have even launched bespoke pump clips so that bars and pubs won’t feel too left out.

In terms of taste, the beer is said to emulate the band’s original Trooper flavour which launched in 2013, so fans of the original won’t be disappointed.

“We are delighted to be bringing our loyal drinkers a new, limited edition, look for our award-winning Trooper,” says Brand Manager, Sam Kennerley.

“The timing couldn’t be more ideal with Day Of The Dead just around the corner and Iron Maiden continuing on their sell-out Legacy Of The Beast world tour with stadium and arena shows, fittingly, in Mexico and also Brazil.”

“We hope that our drinkers will enjoy the tribute we have paid to Mexico’s time-honoured tradition and will pick up a bottle whilst it is available between October and November.”

The news follows the launch of the band’s range of collector bottle caps - needless to say, we left that one to the pros and opted for the booze.

And as if that wasn’t enough, our Iron Maiden-themed week continues with the news that Brazilian biologists have decided to name three new species of spider after rock bands - including Iron Maiden, Def Leppard, Scorpions and Angra.

David Attenborough eat your heart out.

The best whisky to buy today - 28 to choose from.
Music