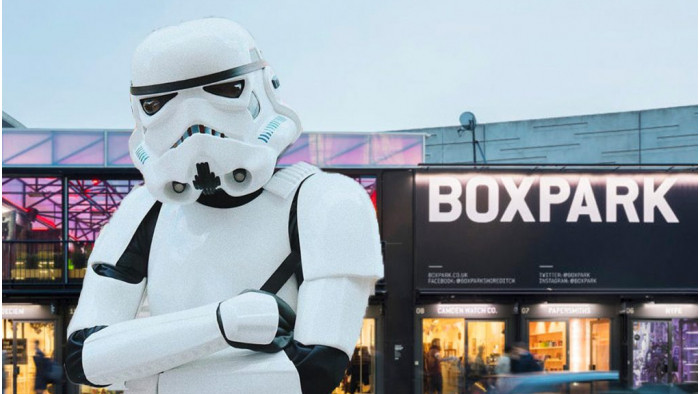 If you’re a Star Wars fan who’s always dreamt of eating cheese off a Stormtrooper’s face or maybe you just fancy getting your hands on a full set of battle armour, then you’re in luck, because East London’s new Stormtrooper pop-up shop is here to fulfill that very wish.

Situated in Shoreditch’s Box Park, the pop-up - which runs from 22-27 October - features every variety of Stormtrooper merchandise imaginable.

And you want to hear the best part? As part of the store’s late-night opening on Thursday 24, prop-maker Andrew Ainsworth will be making an appearance, signing autographs and talking all things Star Wars with fans.

For those who don’t recognise the name, Andrew helped create the original Stormtrooper armour and was the man charged with suiting up George Lucas as part of the first Star Wars film in 1976.

After winning a legal battle for the right to use the original Stormtrooper moulds to create new merchandise and costumes, Andrew has unleashed his new creations to the world. Customers will even be able to taste out-of-this-world delights, including a new Stormtrooper beer, ahead of its official release.

Since then, he’s gone on to create props for a host of major blockbusters, including Alien, Superman and those robot-meets-aliens from the Smash Potato Adverts - which can only be described as his crowning glory.

“We are excited about the future of the licensing programme. When we first worked on the Stormtrooper costumes for the first film in the series, we never dreamed that people would be buying products featuring our iconic design nearly 40 years later,” said Andrew.

Alongside shopping the official merchandise, visitors will also be able to get their hands on free merch - more information will be released via the Facebook event page so be sure to click attending.

And it doesn’t stop there. Movie and gaming subscription service Super Loot have got in on the action too, jumping on the Stormtrooper ship to create a limited run of Original Stormtrooper Mystery Boxes ahead of their Christmas mail-out.

The brand, which compiles a range of mystery merch that is then shipped to subscribers as either a one-off package or monthly service, has created a run of 250 goody boxes. You can pre-order your Stormtrooper mystery box here.

In the mood for more Star Wars related action? Discover our pick of the best Star Wars characters of all time.