This and That: with plenty of whisky, and an added bonus of Victorian Robert Downey Jr (you’re welcome) 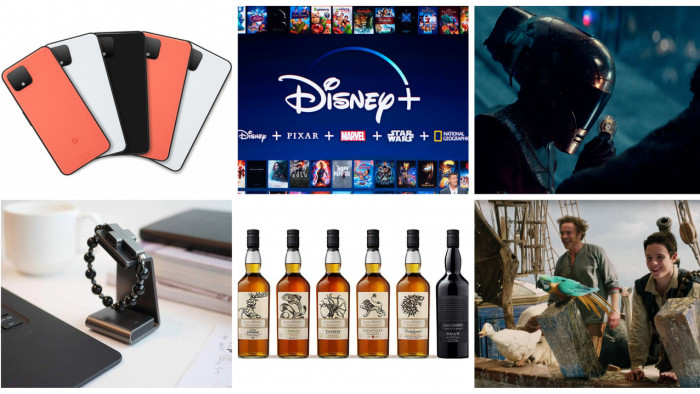 No one has time to be constantly checking the news, and we don’t expect you to be. That’s why this round-up exists.

We’ve scoured the internet, looking high and low, to find you the best stories. This week we’ve got Google’s new phone, eight Game of Thrones whiskies, and a fresh look at a brand new Star Wars character.
So, without further ado - here are the ten best stories of the week.

The Pixel 4 and Pixel 4XL is available to pre-order now, and it’s doing everything it can to compete with the likes of Apple’s iPhone 11 and Samsung’s Galaxy Note 10. They’re available in three colours - Just Black, Clearly White and Oh So Orange - with the Pixel 4 boasting a 5.7-inch OLED display (with a 6.3-inch screen for the Pixel 4XL). The Pixel 4 also has a dual rear camera, along with an 8MP front camera. And, like its competitors, it’s got a load of camera modes including ‘Night Sight’ and Super Res Zoom. So, prices? The Pixel 4 will cost you £669, with the Pixel 4XL at a higher price of £829.

Dr Dolittle - yes, the man who talks to animals - is being brought back to the big screen by none other than Robert Downey Jr. Oh, and it’s set in Victorian England (because why not?). The rest of the cast is pretty star-studded, too - with Ralph Fiennes, Tom Holland and Emma Thompson all lending their voices to animals, alongside live performances by Antonio Banderas, Michael Sheen and Jim Broadbent. The film will first be released in the US in early January next year, before arriving in the UK on 7 February.

The Vatican is launching an eRosary bracelet in the hopes of encouraging more young people to learn about and participate in the Catholic faith. The bracelet will cost you $109 (£85), and activates when the user makes a sign of the cross. Made of 10 balck agate and hematite rosary beads connecting to a silver ‘smart cross’, the smart tech connects to the ‘Click To Pray’ app via Bluetooth. For those who don’t know, Click To Pray is the official prayer app of the Pope’s Worldwide Prayer Network. You can already buy the rosary on the Click To Pray store, but the bracelet will also soon be available on Amazon.
Read: The Vatican has launched an eRosary bracelet for tech-savvy millennials

That Game of Thrones whisky collection

An 8-strong collection of Game of Thrones whiskies has been revived, basically because we can’t get enough of the stuff. The single malt collection, which is themed around the Houses of Westeros, was originally launched in February but has been brought back due to popular demand (plus, it’s Christmas soon). The Night’s Watch even has its own distinctive all-black bottle containing a limited-edition Oban Bay Reserve. The bottles vary in price from £38-£65, and are all available to buy now from Amazon.
Read: This Game of Thrones whisky collection is back by popular demand

Disney+ is launching in the US in less than a month, so to get you really excited the streaming service has decided to release a teaser trailer. The thing is, while most trailers are 2 minutes max., this one is 3-hours long. Well, the trailer is called ‘Basically Everything Coming to Disney+ in the US on November 12’ so we probably should have seen that coming. The trailer includes classics such as Snow White and 1010 Dalmatians, to Disney+ originals such as The Mandalorian. Launching November 12, the subscription will cost $6.99 per month. Still no UK release date, though.

That best look yet at a new Star Wars character

Star Wars: The Rise of Skywalker is only two months away, so naturally its makers can’t help but share a few sneak peaks at the latest instalment. We previously got to meet Babu Frik - a tiny master droid builder - and this time we’ve been given a better look at a brand new character Zorri Bliss. In an image shared by Entertainment Weekly, we get to see a closer look at Zorri’s gold helmet, and she seems to be hold a sort of token, currency or perhaps a data stick. So far we don’t know very much about the character, except that she’s an old friend of Resistance pilot Poe and “kind of” a criminal. Guess we’ll have to wait until Star Wars: The Rise of Skywalker hits the cinemas on 19 December before finding out anymore.

This Amazon live-stream of whisky tasting

Whisky is one of the UK’s favourite tipples, but that doesn’t mean we really know anything about it. Amazon is hoping to change that - with its first ever live-streaming of a whisky tasting session. The retail giant has teamed up with Aberfeldy Distillery to bring you the event, which is set to stream at 7:30pm on 24 October. If you fancy drinking along, you can buy the 3-bottle collection for £40.

Read: Amazon is live-streaming a Scotch whisky tasting - and you can join in

Suggestions that the iPhone SE 2 is on its way have been around for some time - but an analyst has now predicting that Apple’s cheaper handset could be arriving pretty soon. Ming-Chi Kuo of TF Securities has been speaking to investors and according to him, the iPhone SE2 is set to be launched in the first quarter of 2020 at the price of $399 (£320). Some colour options have also been suggested, they are: Space Gray, Silver and Red.
Read: New iPhone surprise: expect to see a new Apple handset early next year

This new cast member to Matrix 4

Neil Patrick Harris has been confirmed to be joining the cast of the new Matrix movie. He will be starring alongside Keanu Reeves, Carrie-Anne Moss and Yahya Abdul-Mateen II (who you may know from Aquaman). We don’t yet know the role that he will be playing, but we do know that production is expected to start early 2020.

Read: The new Matrix film has got a new – and unexpected – cast member

Baileys have launched their new limited edition flavour - Red Velvet. Created in a collaboration between the Irish liqueur brand and Georgetown Cupcake, this drink combines the creaminess of Baileys and the rich, sweetness of red velvet cake. Apparently, it really does taste like red velvet, with its makers describing the flavour as “fresh chocolate cake, topped with a dollop of cream cheese frosting and just a hint of cocoa powder”.