This Game of Thrones whisky collection is back by popular demand

A whisky for every house 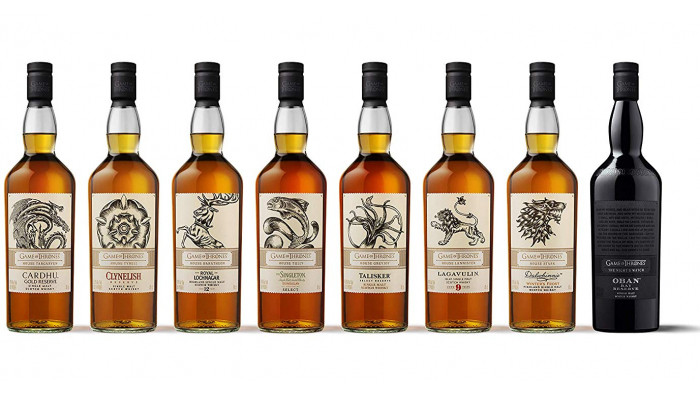 The collection, which was originally launched in February, is being revived due to popular demand (and just in time for Christmas, too).

There are 8 single malt scotch whiskies in total, each paired with one of the iconic Houses of Westeros, and there's a bonus bottle to represent The Night’s Watch.

This comes in the same month Johnnie Walker (also owned by Diageo) launched two new blended scotch whiskies to represent the Houses of Stark and Targaryen, and they join its White Walker blend.

These Houses also get their own single malt variety, too. The Starks’ “resiliency, strength and ability to thrive” are represented by Dalwhinnie Winter Frost. The pairing came about because Dalwhinnie is known for being one of the highest distilleries in Scotland, so is cold and remote much like The North, apparently.

The whisky for House Targaryen is made by Cardhu distillery, which was set up by a mother-daughter duo in the 1800s, and is meant to reflect the “fierce female leadership of Daenerys Targaryen”.

The Houses of Tully, Lannister, Greyjoy, Baratheon and Tyrell are also all represented in single malt form with whiskies from renowned Scottish distilleries Talisker, Oban and Singleton of Glen Ord.

The Night’s Watch bottle is particularly exciting, as the Oban Bay Reserve comes in a distinctive all black bottle, to contrast with the other seven’s white labels and clear bottles.

The whiskies do vary in price, with the Houses of Tully and Baratheon at the cheaper end at £38, all the way up to The Night’s Watch and House Lannister at £65.

If you fancy getting your hands on the whole collection, it will set you back a hefty £398 - but we reckon if you’re a big GoT fan, it’s not an extortionate amount to pay for a limited-edition single malt. Plus it’s a great chance to fill in the gaps of your collection if you already managed to snag some the first time around.

The full collection is now available at Amazon, while stocks last.