This and That: 10 best news stories of the week

From two-foot Unicrons to dodgy Joy-Cons 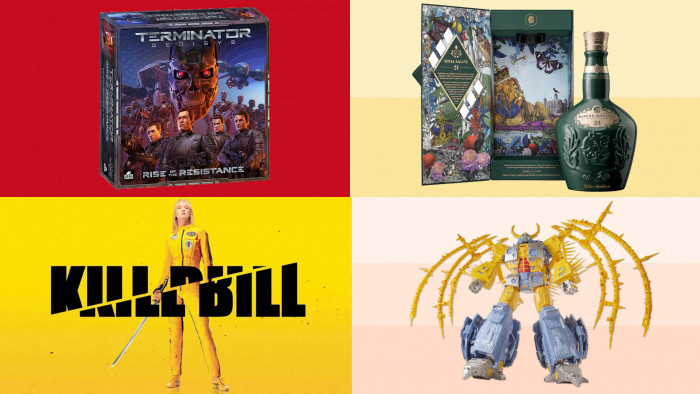 We know how busy you are. Life sometimes gets in the way of doing things you actually want to do, like scouring the wonderful wide web for juicy news stories to get your teeth into.

Don't worry, we're here for you. The following is a carefully curated list of the news that piqued our interest this week.

These are the top 10 stories that had us laughing, crying and buying in equal measure.

Now you have our attention, Hasbro. Initially revealed at San Diego Comic Con, there's been a spot of crowd-funding and the toy giant is set to launch a giant toy - a two-foot Transformer, to be precise. It will cost a whopping £462, and the figure depicts Unicron, the badass of the Transformer universe.

2. That Terminator Board game

Terminator Genisys was, frankly, terrible. But out of that stinker of a movie has come this brilliant board game that has the critics hailing it as one of the better dice role players out there. The game now has us all excited for Dark Fate, which we're hoping will be a return to form for the franchise.

Read: There's now a Terminator board game that doesn't suck

Royal Salute is one of the best-known whisky brands on the planet - but it has always been something of a traditionalist. That is all set to change its iconic whisky bottle getting its very first makeover. Given the brand has been around since the coronation of Queen Elizabeth, this is a very big deal.

The Nintendo Switch is one of the best-loved consoles on the planet but that hasn't stopped it from having a few issues. The latest seems to be an issue with the Joy-Cons - some of them drift and that's not good for gaming. Nintendo, according to a leaked memo, will begin to fix these for free, though, which is nice of them.

Read: If you have Joy-Con issues, it looks like Nintendo will fix for free

The last we heard, Tarantino's next movie is set to be his last. There's rumours that could be a franchise film, with him looking to helm the next Star Trek. But another interesting tidbit has raised its head - he has been speaking to Uma Thurman and a threequal to Kill Bill may well happen.

Read: Kill Bill 3 may actually happen, according to Tarantino

Another San Diego Comic Con announcement, this wearable Bobba Fett helmet has gone straight on our 'want' list. The best thing about it is how much of a faithful recreation of the one in the film it is - its makers have done their homework and it looks fantastic. The worst thing is that we have to wait till 2020 to have the thing.

Read: This official Boba Fett helmet will be the must-have toy in 2020

Elon Musk and his merry band of Mars musos have gotten one step closer to getting to the Red Planet with this rocket launch. Even though the thing only went up some 65 feet, it is one small step, one giant leap in the space race. Only another 140 million miles to go...

Read: SpaceX briefly launches a prototype of the rocket that’ll take us to Mars

Tuca & Bernie is brilliant and its cancellation sucks. That's our thoughts but also the thoughts of most of Twitter. The show, which was created by the team behind Bojack Horseman has been universally praised for being female focused, and at times both crude and heartfelt. And now it goes into the great Netflix dustbin in the sky, unless someone else picks it up. One for you, Hulu?

Apple may well be going headfirst into the heady world of mixed reality, with reports that it is working on a headset that is so accurate, it will be able to track facial expressions. This means that if you are in a mood, then it will know It will also make for some brilliant Animojis.

Read: Apple’s mixed-reality headset might know when you’re in a mood

10. That rum is set to take over the world

You, yes you, put down that gin - it's so last year. Rum is now set to be the new drink of choice with sales of the drink going up and up. The reason: It’s all down to affordability, cocktail suitability and its “sweet taste profile”.

Read: Forget gin, rum set to be the next big drink of choice