This robot won't be easy to disguise in your living room 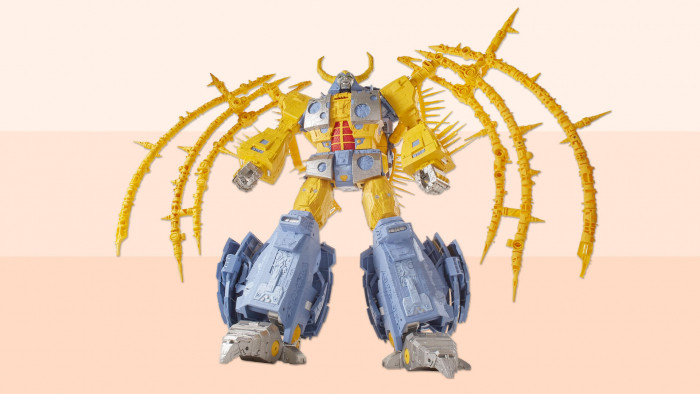 We all loved Transformers as a kid. Some of us even guiltily enjoyed the early 00s film adaptations directed by Michael Bay, despite patchy reviews. But now the question is: do you love Transformers enough to spend nearly £500 on a two foot tall figurine?

If the answer is yes, you’ll be pleased to hear toy manufacturer Hasbro is currently crowdfunding for exactly that: a nearly-£500 two foot tall figurine.

Costing about £462, the figure depicts Unicron, one of the franchise’s most impressive characters. If you’re a real Transformers head, you’ll recognise it from the 1986 animated film version, in which it dwarfs many of the other (also huge) machines.

The model will be fully articulated and weighs around 19lbs. It is Hasbro’s biggest figurine ever. Helpfully, it also comes with a stand to support its own weight.

“Transformers fans may be mere humans, inhabiting a miniscule planet hardly worth consuming, but they are some of the most passionate fans out there,” Hasbro writes on its crowdfunding page. “That’s why HASLAB, the Hasbro Pulse crowdsourcing platform, is the place to awaken such a massive project.”

“Join us in a historic opportunity to celebrate the legendary Unicron with a figure whose features, detail, and scale are worthy of his gigantic legacy.”

The project will start production and shipping once 8,000 fans have committed to backing the model – and if you want to be one of them, you can find out more here.

If you want a blast from the past, check out our selection of the best retro consoles