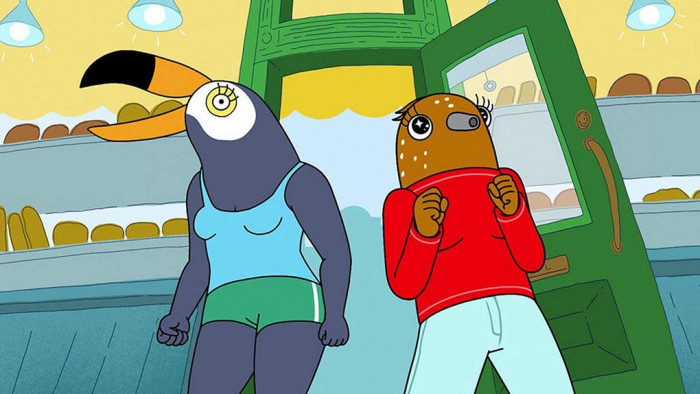 For all its popularity, Netflix has an ability to upset its users like pretty much no other company. For every megahit it funds, another much-loved cult classic gets axed for not producing strong enough numbers.

Now Tuca & Bertie – an adult animation in the style of Bojack Horseman from a female perspective – joins The Santa Clarita Diet, Sense8, The Unbreakable Kimmy Schmidt and Marco Polo on the figurative bin.

In a thread where she praised the cast, crew and writers, and reflected on the positive reviews and feedback, Hanawalt conceded that all the good feelings can’t convince the Netflix algorithm. “None of this makes a difference to an algorithm, but it’s important to me and the way I want to continue making art in this world,” she tweeted, adding that she’s “hopeful we can find a home for Tuca & Bertie to continue their adventures.”

Suffice it to say, Twitter was upset. Really upset.

Lisa’s thread was so gracious but I am not gracious, and cancelling Tuca & Bertie is complete bullshit! That show was universally applauded, it was original and singular and inspiring for all it brought to the table

Tuca & Bertie was loved by ALL of my friends, of all genders, including people who didn’t normally watch animated shows, or who weren’t used to seeing women portrayed as human + gross + flawed yet brave + interesting. A show that made me cry never made me laugh so hard. Thank u.

It's so heartbreaking as an artist to know that things that you've genuinely adored a la Tuca & Bertie, Spiderverse and Kubo struggled to get enough audience numbers when they've been some of the most inspiring work you've seen in years.

Tuca & Bertie was one of the best adult cartoons out there this year and really in a long goddamn time. It's fucking lame as shit netflix passed on a second season. I'm fumin'. I'm a fuckin kettle with the steam out my ears.

I dearly love Tuca & Bertie and felt many moments of joy and surprise while watching it. felt seen, understood, and like I was having a really fun/sometimes difficult conversation with a BFF. I hope all who worked on it know how special it is. I hope it has a life somewhere else.

This is an absolute shame. Tuca & bertie was incredibly inventive in writing and animation. Both childish and mature. It touched on subjects few other shows dare to (or allowed to) talk about - a standout example of what is possible in a show created by women. https://t.co/Y81aSeymGt

While understanding that Netflix has to follow its own numbers, many pointed out that the company had barely promoted it on the service, never giving it a chance to flourish.

Imagine going to a cinema, and it turns out an interesting movie is being shown. However, for some reason, there is no evidence of that movie being played – no listing, no posters –unless you specifically ask the person at the box office?

It not even showing up on the Netflix home page when I login.

I watch a lot of animation, and somehow Tuca & Bertie never showed up for me after its release. https://t.co/3u4G51X9lU

I have been recommending Tuca & Bertie to people since its release, online and in person and overwhelmingly the response was "what show is this? I've never heard of it"

But they loved it once they saw it!

The good(ish) news is that the ten episodes of the show will stay on the service for people to discover. If you’re wondering what else to turn to, look no further than our list of the best TV shows on Netflix.