One small hop for man 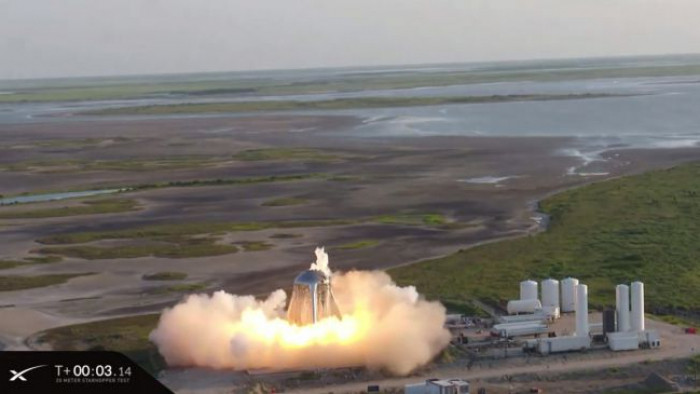 Elon Musk’s SpaceX plans to have humans on Mars by 2024, and the first bit of that figurative journey happened last night. Though given the test rocket only went up around 65 feet, that leaves around 140 million miles to go, give or take a few feet.

Still, the mission was a success: it was only intended as a “hop,” where the rocket shoots upwards into the sky, moves sideways and then lands upright. That may sound like a basic manoeuvre but outside of science fiction, reusable rockets are a relatively new concept. This particular test was a prototype of Starship – SpaceX’s ambitious ship designed to ship people and cargo to Mars. So being able to land upright is quite an important thing. As Elon Musk himself once said: “I want to die on Mars. Just not on impact.”

Still, a hop is a long way from actual take off, and there are many more hop tests planned for the months ahead. But SpaceX is also building two new Starship prototypes that’ll get higher than 65 feet – maybe as high as 12 miles. These tests are the debut of the company’s new “Raptor” engines, which boast 380,000 pounds of thrust – a big improvement on the Merlin engine used on the previous Falcon ships, which maxed out at 200,000.

Last night’s test had a single Raptor engine, but the final version of Starship is set to have 31, giving it twice the thrust of the Saturn V used in the Apollo missions. So last night’s test was one small hop for man, but one giant hop for mankind.

If this has inspired you to dig into some sci-fi, be sure to check out our list of the best space movies. Maybe a movie documenting SpaceX’s (hopefully) successful jaunt to Mars will one day be included...