This and That: with plenty of Star Wars updates, and a drizzle of candy cane gin 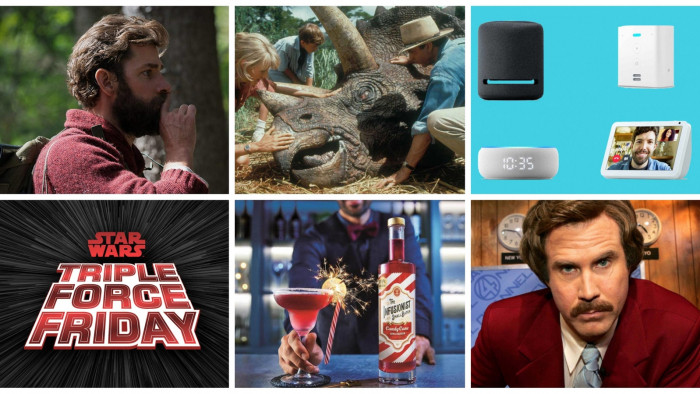 In today’s climate, the news can so chaotic you don’t even want to look at it. You should, but you don’t want to.

So, we saved you the pain and did it for you. We’ve scoured the internet to find you the best news stories of the week (don't worry, there's no Brexit in sight).
From entertainment to tech, here are the ten stories we could not wait to share with you.

Yogurt giant Muller have taken the nation’s love of G&Ts to a new level with their new gin-flavoured yogurts. The two varieties - gin and tonic and pink gin and elderflower - are fat free, high protein and contain 0% added sugar. Intrigued? The multipacks of six (three of each flavour) will be available for £3 from ASDA and Tesco.

Amazon’s annual Echo showcase took place this week, which means there’s a whole range of new Amazon devices to pick up for Christmas. New devices include some new speakers, an Alexa-enabled plug-in, and new earbuds to rival Apple’s AirPods. Many are already available to pre-order too, with the Amazon Echo Dot released first on October 16.
Read: New Amazon Alexa devices: 6 new Amazon products you need to know about

Marvel’s Kevin Feige is helping develop a new Star Wars film, according to The Hollywood Reporter. Disney’s co-chairman Alan Horn revealed to them that Feige is being brought on to help Lucasfilm’s Kathleen Kennedy. They’re not the only ones working on a new Star Wars movie, though, as Game of Thrones' showrunners D.B. Weiss and David Benioff and Rian Johnson are also busy creating something in the Star Wars universe. That’s on top of Jon Favreau’s The Mandalorian for Disney Plus, which is being launched in November.

Canon has unveiled a new entry-level camera - the EOS M200 - to succeed its popular M100 model. This mirrorless camera will be available next month for £499, and offers 4K video, Canon’s latest DIGIC 8 processor and an improved autofocus. It has eye-detection and dual pixel autofocus to help you avoid blurry photos, along with a touch-enabled, selfie screen and a 24.1 megapixel APS-C sensor (the same as in the M100).

This A Quiet Place 2 first look

This week, we got our first look at the sequel to A Quiet Place after director John Krasinki posted a photo on social media. The photo was posted to celebrate that filming for A Quiet Place 2 wrapped this week. The photo shows him walking holding hands with his wife and co-star Emily Blunt, who will be returning as Evelyn Abbott for the second film. We don’t yet know if John Krasinki’s character Lee will return (in flashbacks or otherwise), but A Quiet Place: Part II is set to be released on May 15, 2020.

Read: A Quiet Place 2 first reveal is a huge surprise

Let’s be honest, food and drink is one of best parts of Christmas (well, that and presents) and we’re already seeing the first festive foods make themselves known. This week’s drink is Aldi’s candy cane flavoured gin, with a glittery sheen and flavours of peppermint and vanilla (aka candy can). It’s pretty cheap, too, at £9.99 for 50cl, making it a perfect Secret Santa gift (or maybe just a treat for yourself).
Read: You can now get candy cane flavoured gin

Star Wars fans need to mark Triple Force Friday in their diaries ASAP. Taking place on October 4, you’ll be able to get hold of all sorts of new Star Wars themed-items including toys, books, clothing, and games. Why is it called Triple Force Friday? Well, because it takes place on a Friday and all the products are related to one of the three latest Star Wars projects. These are video game Star Wars Jedi: Fallen Order, Disney+ TV show The Mandalorian. And, the one we're all waiting for, Star Wars: The Rise of Skywalker (out in the UK on 19 December).
Read: Triple Force Friday revealed - huge Star Wars event incoming

That Whisky with 'magic' labels

London’s Whisky Show is set to take place this weekend, and The Whisky Exchange has pulled out all the stops for it. It is releasing a collection of Scotch Whiskies with ‘magic’ labels that you can only read under UV light. With every purchase from The Magic of the Cask collection you get a UV torch, which is an industry first apparently. Don’t worry if you’re not going to the show, the collection will be put on The Whisky Exchange website after the event, with prices starting at a somewhat painful £84.95.

Read: This whisky collection has ‘magic’ labels only you can read

This Will Ferrell Eurovision spoof

Will Ferrell is set to star alongside Rachel McAdams and ex-Bond Pierce Brosnan in the new Netflix comedy which is set to begin filming in Edinburgh next month. McAdams and Ferrell will play two Icelandic musicians competing in Eurovision, while Brosnan plays Ferrell’s father in the film. Ferrell attended the contest in Lisbon last year as part of a research trip, having first been introduced to Eurovision by his Swedish wife Viveca Paulin.

Three cast members of the original Jurassic Park franchise are set to return in the third Jurassic World movie. Laura Dern, Sam Neill and Jeff Goldblum are back in key roles, according to director Colin Trevorrow, so it shouldn’t be just cameos. We don’t yet know the storyline for the third film, but Trevorrow did recently release a short film that at least tied up the events of the second movie. We also don’t yet know the UK release date, but production is expected to start in early 2020.