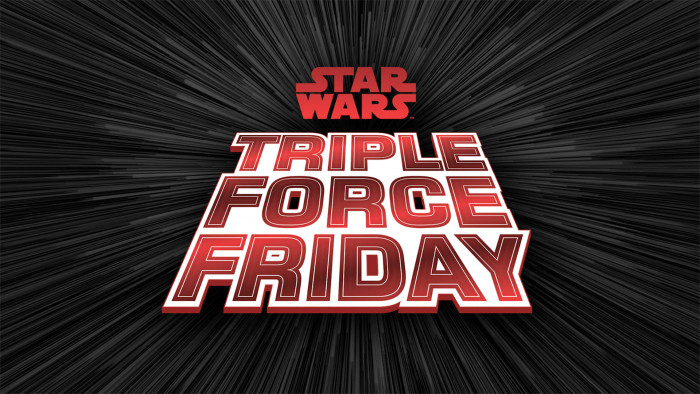 Forget Black Friday, the Star Wars team has come up with a new event for the Christmas shopping season. It's called Triple Force Friday.

This is when we'll be able to get hold of new toys, books, clothing, games and more, all based on the latest Star Wars stories. Imagine the The Exorcist projectile vomit scene, but with Star Wars merchandise dripping off the screen instead of evil green gunk.

Star Wars's Triple Force Friday lands on October 4th, but we'll get a first look at the new Star Wars products this Thursday. Tune into the Star Wars YouTube channel at 7pm on September 26th to see the launch event streamed live from Pinewood Studios in London.

This won't be some drab unboxing either. A huge array of Star Wars favourites are involved, including Daisy Ridley, John Boyega and Oscar Isaac. That Star Wars is "all about the merch" is no secret, but this promises to be a real celebration of everything Star Wars and collectible.

The live stream will be hosted by none other than Warwick Davis. He played an Ewok in Return of the Jedi, but is basically a UK national treasure at this point.

Why is it called Triple Force Friday? Well, October 4th is a Friday and all the products are offshoots from one of the three latest Star Wars projects.

These are video game Star Wars Jedi: Fallen Order, Disney+ TV show The Mandalorian. And, the one we're all waiting for, Star Wars: The Rise of Skywalker. This film is the last instalment of the Skywalker saga, the backbone of the Star Wars story since the beginning. It's out on December 19th in the UK.

We've been told Triple Force Friday's products wil bring us Star Wars joy in "new and unexpected ways", but we'd be happy with some cool toys.