This and That: with plenty of tech updates, and a splash of booze-free Baileys 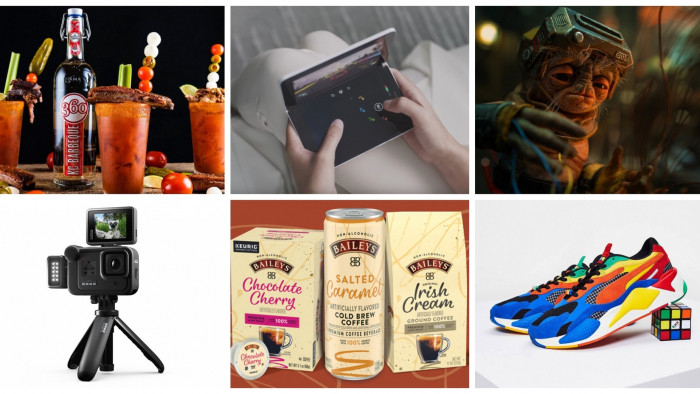 Another week has sped by, and you’ve probably done very little more than glance at the news.

No problem, that’s what we’re here for! We’ve trawled our way through social media to find you the best news stories of the week.
From entertainment to tech, here are the ten stories we could not wait to share with you.

Who knew a trainer inspired by a 1970s puzzle could look so cool? Puma has created these trainers - along with a line of t-shirts and sweatshirts - to celebrate the Rubik’s Cube’s 50th birthday. The collection will be available in store and online some time this autumn. No news on the price yet, sorry.

Microsoft’s annual Surface event took place earlier this week, which means a plethora of new tech will be heading your way pretty soon. The Surface Duo is Microsoft’s return to smartphones and - as you can probably guess from the name - it has two screens. The two screens work together when you use apps and it has also been shown in demos to be a pretty good gaming device. Rather than needing to use a specific Bluetooth controller to play games, the Surface Duo looks to have touchscreen control. Be patient though, as it might not be available until late 2020, though.

Read: Microsoft Surface Duo is the handheld Xbox we've been waiting for

Baileys is launching a new range of non-alcoholic coffees in 2020 and it comes in flavours of Irish Cream, Chocolate Cherry and Salted Caramel. The range, a collaboration between Kraft Heinz and Baileys, has launched a ready-to-drink cold brew, ground coffee bags and K-Cup pods for those with compatible machines. Unfortunately, it’s only a US release at the moment with a UK date yet to be confirmed.

Read: Booze-free Baileys in a can offers up your next coffee fix

Prolific writer Stephen King has announced he is releasing another book just a month after releasing The Institute. We don’t know much about If It Bleeds but it is set to be released in May 2020 and will be a collection of four stories. This will be his 62nd book and will mean he has released a new book every year for a decade - an impressive feat.

Tinder is going to help you up your dating game with a new interactive mini-series. Swipe Night will be an apocalyptic adventure with an interactive element not dissimilar to Black Mirror’s Bandersnatch. Users will be given seven seconds to make critical decisions by swiping left or right to change the storyline. The first episode premieres on the app at 6pm on October 10, with the series continuing every Sunday.

One US distillery has done the unspeakable and created a limited-edition barbecue flavoured vodka. Kansas-based 360 vodka claims the spirit tastes “spicy and sweet, tangy and true” and that the distillery was inspired by Henry Perry, also known as the ‘Father of Kansas City BBQ’. Unfortunately (or perhaps fortunately), it’s only available in the US.
Read: This BBQ flavoured vodka is set to be the perfect Bloody Mary mixer

PUBG Mobile is attempting to compete with Fortnite’s media tie-ins by collaborating with AMC’s The Walking Dead. From October 1 (until some unknown date in early 2020) PUBG Mobile players will be able to take the form of characters such as Daryl Dixon, Rich Grimes, Negan and Michonne. They’ll also be able to use Michonne’s katana and Negan’s barbed wire bat, Lucille in the free-to-play game and ride Daryl’s motorbike.
Read: The Walking Dead crossover event unveiled by PUBG Mobile

The classic card game UNO has been around for decades, but as the game relies on coloured, numbered cards it often excludes the visually impaired. That’s about to change (finally) as its makers Mattel have launched a braille version of the game. Designed in partnership with the National Federation of the Blind in the US, the new UNO deck features embossed braille on each corner, signifying the colour, number or action written on the card. The new braille version will cost $9.99 and be available exclusively through Target in the US. Here’s hoping that there’s a UK launch to follow.

Read: UNO has launched its first braille deck - and it's even got Alexa involved

The new GoPro Hero8 Black may look almost identical to its predecessor, but it’s actually had some pretty decent upgrades. It’s 14% lighter and now has a foldable built-in mount. It also now has HyperSmooth 2.0 stabilisation to reduce camera shake on shots and a TimeWarp function. It also has voice control, three mics, and the ability to shoot 4K/60p and 1080/240p video. You can also get a number of mods to attach to the camera, including a flip-up screen and an LED light. It’s available to pre-order now for £379.99.
Read: GoPro reveals new Hero 8 Black with digital lenses, improved stabilisation, and more

With less than two months to go, Star Wars: The Rise of Skywalker has revealed a bit more about the new characters we might be meeting. Meet Babu Frik - a master droid builder who just so happens to be an adorably small, furry alien. A toy version of the droid builder was also revealed during the Triple Force Friday preview event in September. The miniature came as an accessory attached to the Hasbro Black Series C-3PO figure. Star Wars: The Rise of Skywalker is set to be released in the UK on December 19.