As if you needed a better reason to swipe-right 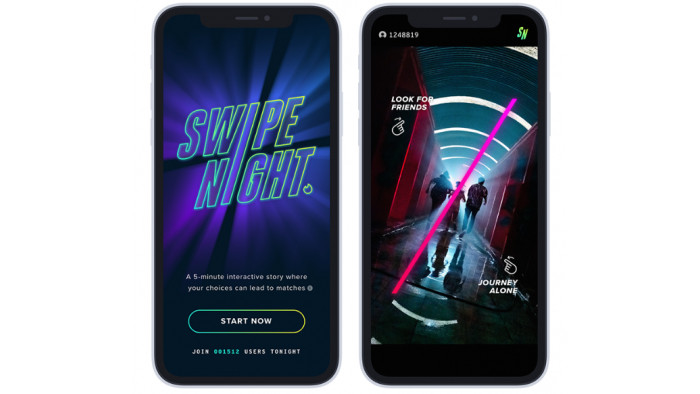 If you’re feeling disillusioned with the dating game, it’s time to bury your head in a pillow, pop in those earplugs and reassure yourself that your cat will always love you. Why? Well, it seems there really is no escaping dating app Tinder, as the brand readies itself to unleash an interactive TV show into the world.

Yes, you did read that correctly. The swipe-able app is poised to take over your screen - but not in the dodgy old school teletext-dating kind of way (for those who can even remember what teletext is), don’t worry.

The mini-series entitled Swipe Night is something of an action-packed apocalyptic adventure, following a similar interactive concept to Black Mirror’s Bandersnatch. It’s also likely to involve more drama than right-swiping your best mate’s boyfriend - or even finding him on there in the first place, for that matter.

Featuring a neon dog, plenty of partying and a man who appears to get crushed by what looks like a giant fridge, the trailer’s opening sequence poses the question: "What would you do if you suddenly had three hours until the end of the world?" before teasing a number of possible options.

Users will then have seven seconds to make critical storyline decisions by swiping left or right at key moments.

Part end-of-the-world drama, part you-might-actually-get-a-date-out-of-this wishful thinking, the mini series is set to premiere every Sunday at 6pm on the app. You then have until midnight to make episode decisions that could ultimately lead to real-life matches. It all sounds rather bizarre.

"Seven years ago, Tinder revolutionised the way we meet with the invention of its Swipe feature,” Tinder boss Elie Seidman said recently of the project. “Now, with Swipe Night, we’re proud to be pushing the envelope again, by letting people connect in ways they can't anywhere else."

"The level of innovation, interactivity and immersiveness in the Swipe Night adventure is unprecedented in the dating space, and we’re excited to continue experimenting with new ways to connect on the Tinder app."

The news comes mere months after a Tinder-themed card game called Matchr was unleashed into the world - giving a whole new meaning those looking for their perfect match.

It really does seem as though the world can’t get enough of true love - or at least, interesting ways to find it.

The first 'episode' is set to premiere on the app at 6pm on October 10 in the user's respective time zone - but sadly only for US users.