The family favourite has a whole new feel 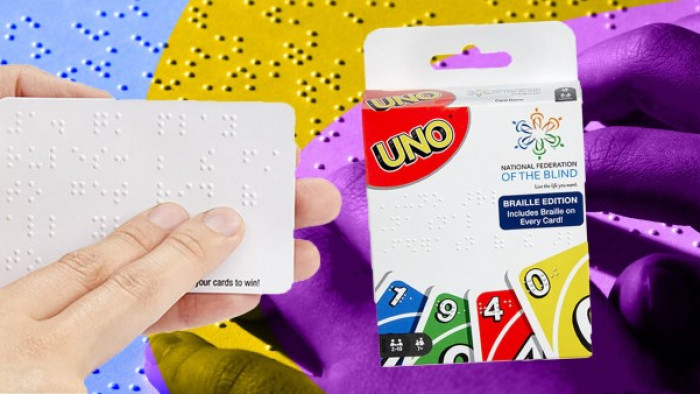 The classic card game UNO has been entertaining families (and causing mass feuds) ever since it was first created by an Ohio barbershop owner back in 1971. However, up until now, it’s been a game widely off-limits to the visually impaired. That’s all about to change, thanks to a handy little update from maker Mattel, who has finally launched a braille version of the classic card game.

Designed in partnership with the National Federation of the Blind in the US, the new UNO deck features embossed braille on each card corner, signifying the colour, number or action denoted on the face.

Alongside braille on individual cards, the packaging will feature braille on the front and back for clear identification. It will also direct players to the website where they can find clear playing instructions, alongside a nifty little feature in the form of voice-enabled instructions available via Amazon Alexa and Google Home.

The update has been a long time coming, considering UNO first launched nearly half a century ago - but hey, it’s definitely a case of better late than never!

The launch is great news for card game fans, with the update finally allowing sighted and visually impaired players to play together for the first time.

Ray Adler, Global Head of Games at Mattel, said of the launch: ‘With the launch of UNO Braille, we’re making a real impact on a community that has been underserved by providing a game that both blind and sighted people can play together.

News of the update first circulatd when Uno tweeted a video depicting a group of blind, visually impared and sighted players enjoying the game together for the first time.

However, it’s not the first time the game of Uno has been reimagined. You may recall UNO ColourADD which launched back in 2017 - making the world famous card game accessible to those with colour blindness.

‘UNO Braille is doing more than making this beloved game more accessible,” notes Mark Riccobono, President of the National Federation of the Blind, “It’s also helping promote the importance and normalcy of braille by putting it in places people might not expect, and integrating it into the play of blind children.”

The new braille version of UNO will cost $9.99 and be available exclusively through Target in the US at launch, however, we’re pretty sure the game will hit UK shelves in next to no time.