This and That: with plenty of Star Wars merch, and a £4K James Bond champagne 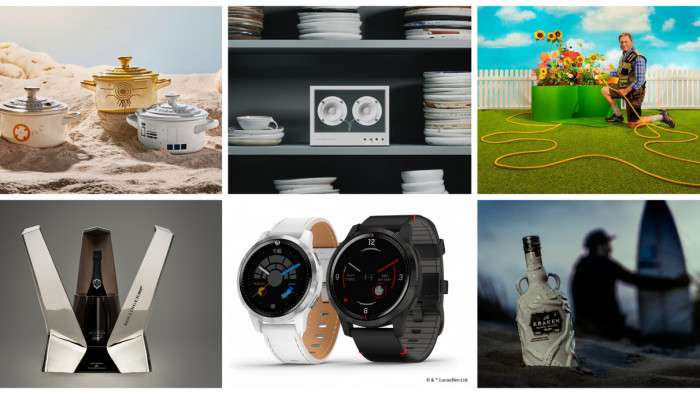 It’s normal for work gets on top of you every now and then, and sometimes you really just don’t have time to check the news.

No problem, that’s what we’re here for! We’ve waded our way through social media to find you the best news stories of the week.
From entertainment to tech, here are the ten stories we could not wait to share with you.

El Camino, the new Breaking Bad film, is on Netflix now. The highly-anticipated film, which starts straight after the events of the TV show, was only officially announced in August but seems to follow Jesse (Aaron Paul) as he’s on the run from the police. Written and directed by Vince Gilligan, the movie was shot between the series of the other spin-off Better Call Saul.
Read: El Camino: A Breaking Bad Movie arrives - stream on Netflix now

This Scandinavian wireless speaker is everything you expect it to be. The speaker, which is aptly named the Small Transparent Speaker, is completely see-through. Made with a single aluminium “uniframe” and tempered glass panels, the speaker has built-in Bluetooth, two three-inch L/R Drivers, a Class D amplifier and true wireless pairing so that you can create your own surround sound system.

Read: This wireless speaker is completely see-through and designed to last forever

Bollinger is celebrating 40 years of being James Bond’s official champagne doing what it does best - releasing a limited edition bottle at the staggering price of £4,500. The magnum plays tribute to Bollinger’s first Bond film Moonraker, which took Bond on a rather unusual mission into outer space. The gift box is designed to look like the iconic space shuttle by Eric Berthes, and is crafted from pewter and wood veneer. The space shuttle encases a Saint Louis crystal ice bucket and a magnum of Bollinger 2007.

That PS4 update with Remote Play

Android users have finally caught up with everyone else as Sony’s latest PlayStation 4 update now offers Remote Play for all smartphones. Those with iPhone and iPad devices had already received Remote Play earlier this year, but they also got an update so that players can display the controller “at all times”. Players will also now be able to use their DualShock 4 wireless controllers with Remote Play, too. The party function has also been improved so that up to 16 people can play (rather than just 8).
Read: The new PS4 update is here and Android users will finally get Remote Play

This alcohol-free Negroni from Seedlip

Seedlip has quickly become a teetotaller’s best friend and now, they’re at it again with a pre-made bottle of Negroni (no alcohol included, of course). Described as a “bold and bittersweet contemporary take” on the original, NOgroni contains a mixture of Seedlip Spice 94, Aecorn Bitter and Aecorn Aromatic. Bottles of NOgroni are available at Selfridges now for £10.

Garmin’s new Legacy Saga Series are everything a Star Wars fan could ask for. These two special edition watches play tribute to two of the most iconic characters - Resistance’s hero Rey and of course, Darth Vader. Both watches come with character-inspired visuals, avatars and exclusive badges. They also have everything you’d expect from a Garmin watch; 24/7 health monitoring, social media and text notifications and a number of safety and workout features. The watches are available now on the Garmin website for £349.99 each.
Read: Garmin’s Legacy Saga Series are Star Wars-themed watches you’ll actually want to buy

This new look for Kraken rum

Every year Kraken Rum attempts to raise awareness about the damage pollution is doing to its “deep watery home”, and this year is no different. The new 2019 limited-edition ceramic bottle is decorated with the tentacles of the infamous sea monster, as Kraken Rum teams up with Surfers Against Sewage. For every bottle sold £1 will go to the charity to help organise beach clean-ups. It’s still the same dark rum, though, just in a new, shiny bottle. Fancy doing your bit, the bottle is available now on Amazon for £34.50.

In case you didn’t already know, Star Wars: The Rise of Skywalker is out in December, which means the market is being flooded with Star Wars merchandise. One we did not see coming was this Le Creuset collaboration. There are eight items in the range including a Darth Vader Dutch Oven and a Han Solo Carbonite Signature Roaster. As you can expect, it’s pretty pricey with the Han Solo roaster costing $450 and the dutch oven priced at $350.
Read: Is this Star Wars Le Creuset the cookware you've been looking for?

This new look for the Devialet Phantom Reactor

French brand Devialet has given its Phantom series speakers an upgrade and launched a new matte black version. The Reactor took three years of research and development to make as the matte black colour involved “some very technical challenges” when it came to maintaining the brand’s high-quality acoustics. Available now, you can buy the speaker online or from John Lewis, Selfridges and Harrods for £990.

Read: The Devialet Phantom Reactor is back with a brand-new look

Gardening extraordinaire Alan Titchmarsh has just become the face of adidas new range of gardening wear and it’s as terribly wonderful as you’d expect. The Gardening Club collection is swathes of brown and grey and includes a pair of “Hoverturf” trainers, a “Gardening Sonicdrive Vest” (€110) and of course, trousers that zip down into shorts for €81. The full range is available from the adidas website from October 12.
Read: Alan Titchmarsh fronts Adidas’ new range of gardening trainers