It comes with a space shuttle gift box, too. 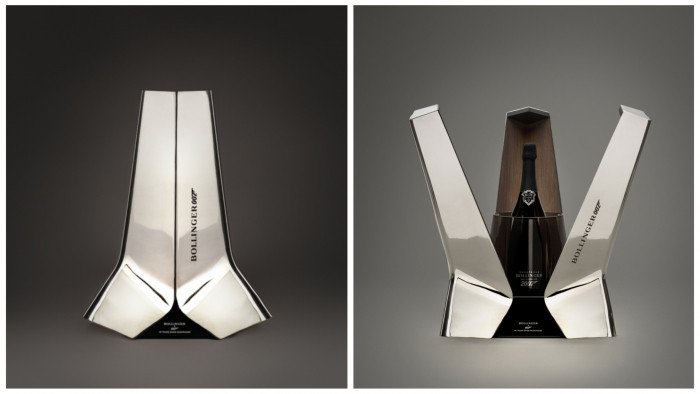 Bond’s drink of choice may be a martini (shaken, not stirred of course) but the British secret agent definitely isn’t averse to having a glass of champagne or two.

His champagne of choice? Bollinger, naturally. The brand has been the official champagne of 007 since 1979, when it first appeared on screen in Moonraker (yes, the space one).

And, 40 years later the partnership is still going strong. To celebrate, Bollinger is doing what it does best and releasing two limited edition bottles - with one being worth a staggering £4,500. That £4,500 Magnum pays tribute to Bollinger’s first film Moonraker, which took Bond on a rather unusual mission into outer space. The company has enlisted the help of designer Eric Berthes to re-imagine the iconic Moonraker space shuttle. It’s crafted from pewter and wood veneer and will encase a Saint Louis crystal ice bucket and a magnum of Bollinger 2007. Each box is individually numbered with only 407 copies available, and will be official unveiled in Paris on 7 November.

On the more affordable side is the Bollinger 007 Limited Edition Millésimé 2011. This jet-black bottle is in celebration of the upcoming movie No Time to Die, the 25th instalment in the James Bond series, and it comes adorned with the number ‘25’ made from the titles of previous films. This 2011 vintage is made entirely from Pinot Noir sourced from the French village of Aÿ - a first for Bollinger who have never used the vintage and village exclusively to make a dedicated wine. The bottle (and accompanying gift box) was released via a pre-sale on 5 October in celebration of James Bond Day for £150. No Time to Die will be released in the UK on April 2, 2020.

The clues were THERE!
Kitchen