Is this Star Wars Le Creuset the cookware you've been looking for?

As Star Wars tie-ins go, this is quite something 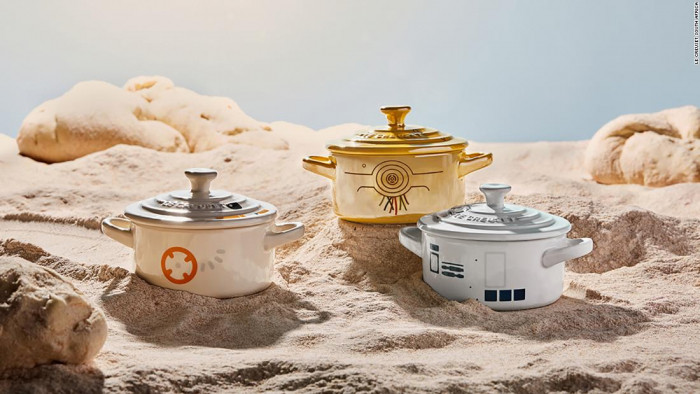 George Lucas was pretty canny back in the day. Getting it in his contract that he would get residuals on merchandise sold off the back of Star Wars is one of the shrewdest moves Hollywood has ever seen, making Lucas rather rich in the process.

Since then, we have seen A LOT of strange Star Wars tie-ins - from Tauntaun sleeping bags, the Star Wars cookbook (everyone loves a Wookie Cookie) and even a Princess Leia costume for your dog.

Now, to add to this list, the Star Wars Le Creuset set. Recently revealed, there are eight kitchen items available that celebrate the upcoming launch of Star Wars: The Rise of Skywalker.

These include a Darth Vader Dutch Oven and a dish that has a hand-painted Tatooine sunset scene. There's also a Millennium Falcon Trivet available and some smaller pieces, including mini cocottes that have been inspired by R2-D2, C-3PO, and BB-8. Oh, and perhaps the best of all is a Han Solo Carbonite Signature Roaster.

All of this is limited edition, with a price to match. The Han Solo roaster costs $450, the Darth Vader Round Dutch Oven $350. The smaller items are all around $30.