New Guns N'Roses material is on its way, says Slash

The top-hatted axeman has an update 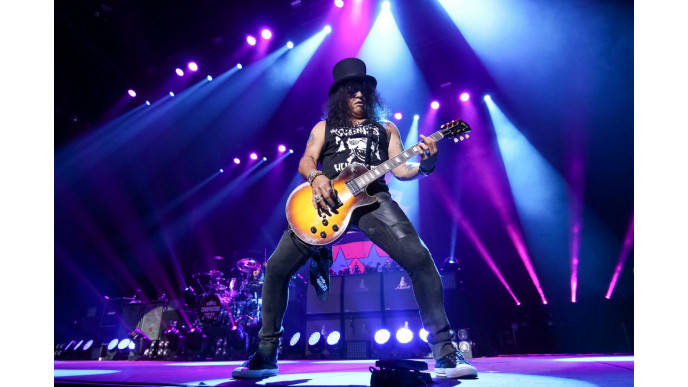 That’s ace. He’s sort of always been the coolest man in the world, just eternally being great, wandering the globe with a fag dangling out of his mouth, an icon completely at ease with his iconicness. Here’s a crap joke about him: Slash is the guitarist of Guns N’Roses, but sometimes people think he’s the drummer, because of his high hat.

Anyway! While on tour with Myles Kennedy and the Conspirators, the man born Saul Hudson (in Stoke!) revealed that GN’R just might be working on some new material.

He said: “Axl [Rose, singer], Duff [McKagan, bassist], myself and Richard [Fortus, guitarist] have all talked about […] material and stuff going on already for a new record. It’s just, with Guns N’ Roses, you don’t go, ‘Oh, there’s a plan, and it’s gonna be like this,’ because that’s not how it works. Basically, the only real answer to give is we’re hoping to put a new record out, and we’ll just see what happens when it happens.”

Fortus had earlier mentioned some planned recording, telling a radio station: “Slash is on tour right now. Once he gets back from that, we’re going to get some more recording done and hopefully get an album out soon – and then we’ll get back to touring.”

It’s eleven years since Chinese Democracy, GN’R’s last album, but that came fifteen years after “The Spaghetti Incident?” (which was a collection of covers anyway), so fans are used to waiting.

Axl recently released his first new song in a decade, a complete masterpiece about an asteroid written for a Looney Tunes cartoon.

If the whole new album sounds like that, count us in.