You know what the Highway Code was missing? Emojis. 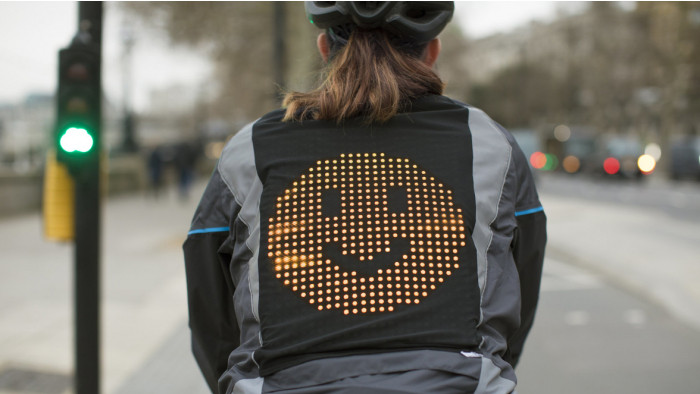 Any cyclist will admit that roads are a precarious place for anyone on a bike. After all, there’s no bigger rivalry than between the bike and the car.

And while road rage may make a good viral clip, with more than 2,000 cyclists being killed on Europe’s road, a ceasefire needs to be called.

Car manufacturer Ford seems to think it’s up for the job and reckons it has found a way to bring harmony to the roads - in the form of an Emoji Jacket.

This prototype jacket allows a cyclist to share how they’re feeling (no rude gestures allowed) along with indicating when they’re about to turn or slow down.

The chosen emotions are displayed on a large LED panel on the cyclist’s back in a very ‘in your face’ way, so there’s no way a driver can say they didn’t see you.

The emojis are a little limited for now but we’re not sure what a monkey with hands over his eyes translate to in the highway code, anyway.

Emoji expert Dr. Neil Cohn PhD, who may have the coolest title ever, and he’s also naturally quite fond of this idea.

“Emojis have become a fundamental part of how we use language,” he explains. “Whether used to convey facial expressions, humour, or sarcasm, they have become integral to our ability to express ourselves and quickly.

“This jacket created in partnership with Ford Share the Road allows riders to express their feelings and creates an important emotional link between them and other road users.”

Unfortunately as the jacket is still a prototype, it may be a while before you're lighting up the roads in this fetching number.