Yes, this is real 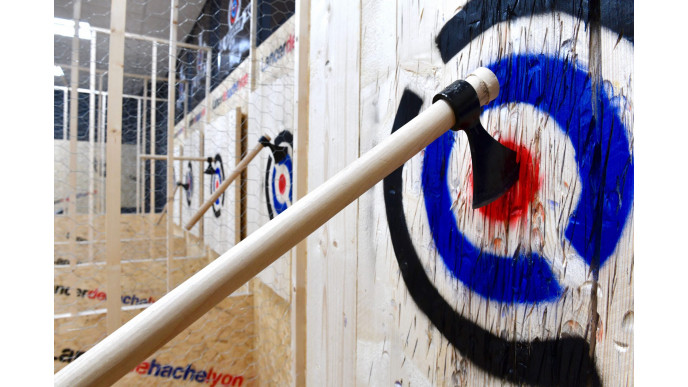 There has recently been quite the trend of themed bars, combining organised fun with alcohol to stop us having to come up with ideas ourselves. Not always a step up from great drinking experiences, but at least a step to the side.

We’ve seen ping pong bars, darts bars and mini golf with cocktails, in an effort to provide good, clean and safe fun. However, we’re starting to think we’re behind the curve.

Hey, here's something you didn't know about London that's been staring you in the face

Now, if you’re the sort of person who thinks combining alcohol with actual axe-handling sounds like a terrible idea, your name is not Trent Larkins.

We know what you’re thinking, ‘Trent Larkins’ feels like a made up name of the exact sort of person who would open an axe-throwing bar, but as far as we can tell he’s a real man whose real job is director of marketing for Craft Axe Throwing, a venture with bars in Missouri, Nebraska and now South Carolina.

The venue’s website describes Craft Axe Throwing as “s a game that anyone can play (and win)”, which feels like they might be oversimplifying things. We’re not the experts, though, so we’ll leave them to it.

If you’re wondering about the logistics of axe-throwing bars, let us help you out.

You can pay for a lane where up to four people can throw axes at a target to score points – hey, it’s just like bowling, except not at all like bowling and more like throwing a literal axe.

Don’t worry, though, they have ‘Axexperts’ to teach you the basics before you get involved. We’d have called them ‘Axeperts, but again, let us stress this, we’re not the ones who have opened a chain of bars where you can drink alcohol and throw axes within the same enclosed space.

Oh, and it gets even better – you can bring your kids along to watch or even throw!

“It’s a nice way, after a long day at work or a long weekend, to come in and throw some axes with your friends, have a beer or two, and get some stress off.”

Or, according to the Craft Axe Throwing blog, you can use it as an ice-breaker for a first date.

“Are you ready to have a successful first date that both of you will remember forever? Take an axe to the awkwardness of a first date and have a blast throwing axes!” they write.