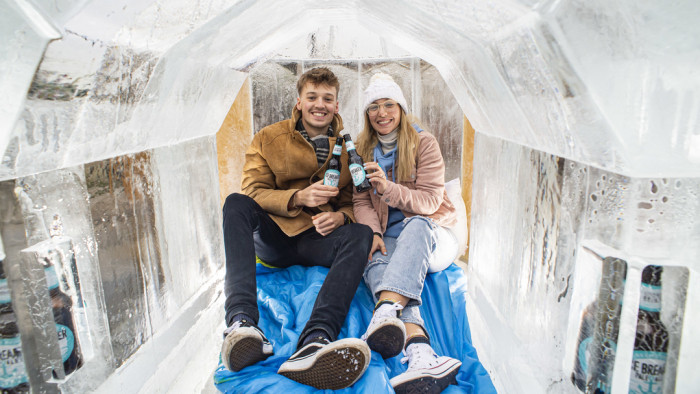 There’s nothing better than an ice cold beer after a long day; an idea that Greene King seems to have run with, as they unveil an igloo made of frozen beer.

Sounds like a fun idea until you realise you have to lick the same piece of beer-flavoured ice as everyone else.
Found outside The Anchor pub in Southwark, London, the igloo - also known as the Ale B&B - is five-foot tall and created out of over 1,000 litres of frozen beer.

Visitors are invited to come inside and taste the walls, but if you don’t fancy sharing (good choice), you’ll also be given free bottles of their new beer, Ice Breaker, while hanging out in the ice sculpture.
The unfiltered pale ale is available in over 180 pubs and is made with Simcoe and Citra hops to give it flavours of guava, passion fruit and pine resin.
Managing director of Greene King, Matt Starbuck guaranteed this will be “the coldest beer you’ll find in the capital”.
He added: “There are a multitude of quirky and unusual B&B stays available in the UK at the moment, but we’ve never seen a real frozen igloo, particularly one where the walls are made from real beer.
“Our Ale B&B is the perfect place to cosy up with a friend or loved one and enjoy an ale-tasting experience like no other.”
Fancy trying it out? Best to head over sooner rather than later, as Greene King simply says the igloo will be open “until it melts”.