5 amazing bits of superhero news you might have missed

A lot has been happening in the world of superheroes. 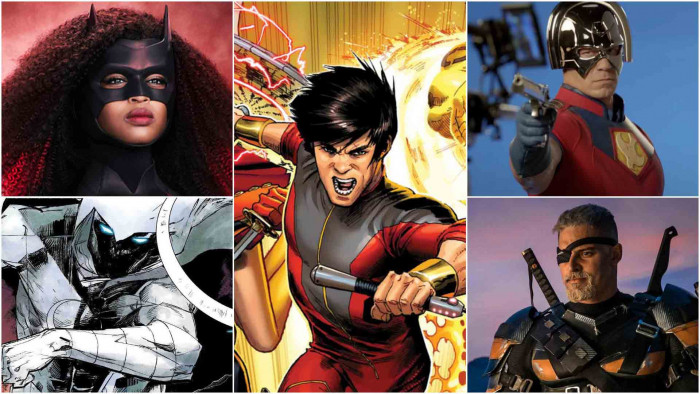 A lot happens in the world of superhero shows and movies - and sometimes it's a little much trying to keep up with it all. That's where ShortList comes in. We've rounded up the best snippets of superhero news that has happened this week.

This is your guide to the most up-to-date superhero rumours and news - whether it's a new Marvel series, MCU movie or DC doing whatever DC is doing with The Justice League and beyond.

Here are 5 bits of superhero news that you might have missed. And if you haven't missed it, then it's always good to get a bit of a recap.

Before you dive in, though, here's a selection of our superhero shortlists:

1. Marvel's Moon Knight has its star and director

Marvel's Moon Knight is set to be the latest in the long line of Marvel TV shows and there's a big name that is in talks to join the series. Fresh from Star Wars - and having already previously starred in X-Men Apocalypse - Oscar Isaacs is said to have signed up to play the role, and there's a good chance that we see him in an upcoming Marvel movie, too.

It's not official but Deadline has the details and reckons it is happening,. As for Moon Knight, the character is Marc Spector, a merc with a ton of alter egos. In the comic books he gets his power from Egyptian moon god Khonshu and uses this to fight bad guys in LA. It may not be a well-known character but then remember all of this begun with b-list Iron Man.

A director has been chosen for the series which has Jeremy Slater (The Umbrella Academy) as its showrunner. Mohamed Diab is set to be director, who has directed some of the best grossing Egyptian movies of all time.

Empire has got a fantastic exclusive of three from James Gunn about his upcoming Suicide Squad movie and he reckons that it should sit nicely alongside David Ayer's version which critically rubbished but a hit at the box office.

“It does not contradict the first movie, I don’t think. It might in some small ways… I don’t know…” Gunn says, continuing with: “Listen, David Ayer’s gotten trouble for the movie,” he says. “I know it didn’t come out how David wanted it to come out. But he did one really, really great thing, and that is he picked fantastic actors to work with, and he dealt with these actors in building their characters in a really deep and fearless way. It’s something David definitely deserves to be lauded for, and it’s definitely added to this movie.”

Shang-Chi and the Legend of the Ten Rings is an important movie for Marvel and its cast. It's the company's first Asian-fronted movie and it has finished filming. Main star Simu Liu has been celebrating the wrap on Instagram, which was prolonged due to Covid-19. Speaking about the shoot and the importance of it, he said: "From the lights to the sound, behind the screen and in front, I’m so proud of this crew of people and I can’t wait to show you what we made."

The makers of Batwoman didn't flinch when Ruby Rose said she was leaving the character and the show after just one season. Instead, they recast and found the perfect replacement in ‎Javicia Leslie.

We have been waiting a while to see her suit up but official pictures have emerged and she looks fantastic. There's no word as to how the show will reveal the change in the Caped Crusader but it's off to a great start with both the casting and the costume reveal.

Not content with re-editing Justice League to his liking, Zack Snyder is piling in the characters with reshoots and the like and the latest to come aboard, according to rumours, is Deathstroke. Played by Joe Manganiello, Deathstroke was in a post-credit sting in the first iteration of Justice League and now it seems he is shooting new scenes to be added.

He will join a team that also, according to rumours, has Jared Leto reprising his role as The Joker.