Not just Note: Samsung teases a new tablet and wearable

Unveiled today and next week 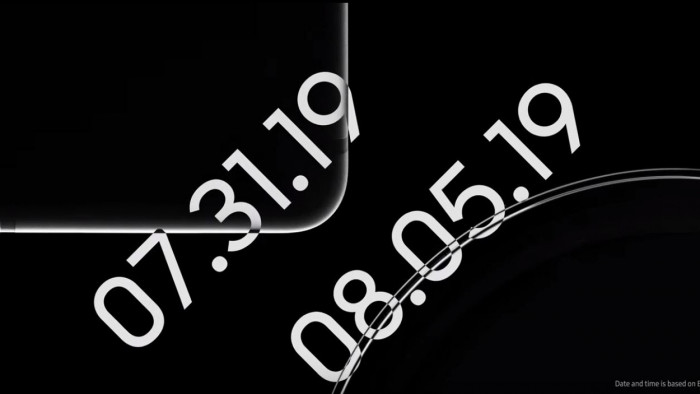 Samsung has got a new tablet and wearable up its sleeve. Figuratively speaking, that is, even if the sleeve is likely a good hiding place for the latter.

Regrettably, Samsung seems to have accidently cut the video so we can’t get a clear look at what the products are, and then doubled down on the non-announcement by putting out a press release about it.

The good news is that you won’t have long to wait, with the video flashing up two dates: 07.31.19 and 08.05.19. That’s American formatting, rather than May and some brand new 31st month – it means we can expect more today and next Monday.

Notably, both of those dates are well ahead of the official Samsung Unpacked event on August 7, where we fully expect to see the Galaxy Note 10 in all its S Pen-toting glory.

Even if you really can’t wait for the full reveal, you don’t have to be a genius to guess what Samsung is working on. The tablet is very likely to be the Samsung Galaxy Tab 6 which, as you’ve probably guessed, is a follow up to the Samsung Galaxy Tabs 1, 2, 3, 4 and 5e. They’re high-end iPad alternatives, with heavy reliance on the S Pen which has come bundled for the past two generations. The close-up shot of a keyboard in the video suggests we may be going down a full iPad Pro, laptop surrogate approach, but we’ll have to see.

The wearable is almost certainly the Samsung Galaxy Watch Active 2 – something we’ve already written about here. If the pre-release rumours are to be believed, you can expect Apple Watch-like health functions leading the way.

But no matter how good it is, it won’t feature on our list of the best Android smartwatches. Why? Because since 2013, Samsung has stuck doggedly to its own (very good) Tizen wearable OS. It would be the biggest surprise of all if Samsung were to be returning to the Wear OS fold.