Dry January(?): What I learnt from sober dating for a month

How did we ever do this as teenagers? 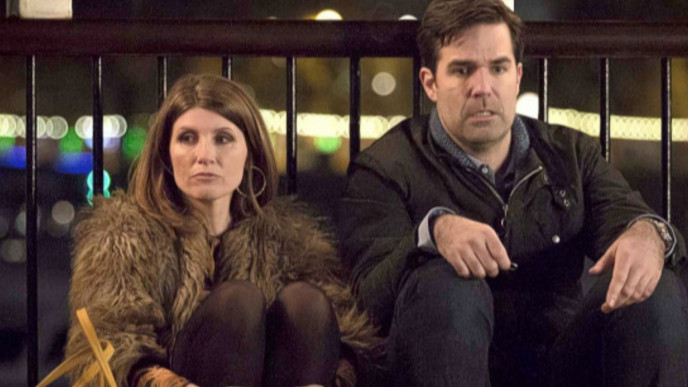 ’When was the last time you had a sober first kiss?’

My friend asked me (and herself) this recently. Initially I reeled at the thought that she would even think I needed booze that much, and was about to pluck a name out of the ether - then I realised it was probably my teenage boyfriend Darren, when I was 18.

Think about it, a first kiss with someone, where you hadn’t touched a drop. Longer ago than you’d care to admit, I’d wager.

I started thinking about how much booze affects our love lives, or more specifically, dating lives, and how intertwined alcohol and pulling are. Obviously this makes sense: unless you’re American you can’t possibly fathom the idea of simply telling someone you find them attractive - what are you, a psychopath? You need that sweet infusion of booze to gently tell you it’ll be OK to go to a restaurant or a pub, possibly with someone you’ve never met (scary) or someone you know and actually like (terrifying) and talk to them, for hours, without a silence creeping in. Four pints are your excuse for saying something a bit stupid, your way of quashing your nervous energy, and your confidence chaperone as the evening goes on.

But what happens when you’re not drinking? For, say, a WHOLE MONTH. January, to be precise, and predictable. I went on a few dates in the past month and, let’s just say, it’s a whole different world out there.

Here’s what I learnt.

Without a red wine haze to promote the part of your brain that just says, ‘Let them get on with it, they’re probably fine,’ you’ll start to be hyper-aware of what you’re saying and doing, mostly at the start of the date. You’re probably more nervous than you would be usually, seeing as the average Brit probably pre-drinks before a date what the average European would consider too much for an entire weekend.

Suddenly you’re using phrases you never usually would, and using too many words, saying things like ‘How was your working day today?’ and ‘Your coat looks nice is it from ASOS or somewhere else also you’ve got hair your hair is nice isn’t it, what is hair?’

Not to mention your movements. When you’re half a bottle of something into a date your movements all seem fluid and warm and natural and perhaps even sexy. But when you’re sober, unfolding a napkin feels like trying to make an origami cactus and why don’t your fingers work any more?

You won’t get The Fear

How many times have you come away from a date, or a one night stand, or a hook up, and combed through your behaviour until it starts to get hazy, to work out if you did something weird? How many times have you been sat in a meeting at 2pm the next day, in last night’s clothes and nursing your fourth sugary tea when suddenly you get a flashback of telling them you once had sex at your Aunt’s funeral and realising you were definitely 30-40% more drunk than them at this point? Was the look on their face admiration or judgement? What about that thing you said in bed? What happened after that bit?

Well put your smug hat on, because when you’re sober you don’t get The Fear, so you probably weren’t as odd. Then again, anything you did say or do is completely you, so you have nothing else to blame, so it’s swings and roundabouts with this one.

Sex is different, but mostly better

Approximately 80% of my mates told me I was ‘brave’ for sleeping with people whilst sober, with one remarking ‘I didn’t think people even had sober sex any more.’ Yes, it’s pretty nerve wracking, but once you’re actually doing it, you’re both just happy you’re having sex and you’ve managed to get this far. OK, you probably won’t tell them what you’re into or do anything off-piste for the first few times, but you’d be forgiven for needing a whiskey or three before you do that, and at least you can actually feel everything, rather than being shitfaced and half-numb at the exact opposite point you want to be.

It’s the build up to it that’s the weirdest thing ever. How are you supposed to lean over and kiss someone over a Diet Coke? The chasm between the two of you seems endless, do people always sit this far apart on dates? Did it always take approximately eight minutes to get my skinny jeans off? Who invented these things? They were almost certainly a virgin. What do you do when you’re five drinks in? Nothing different, it turns out, just that booze makes you care about the consequences less. Everything is in HD with sober dating.

The lesson from this is that sex is probably optimum when you’ve had two drinks exactly. Don’t argue with me, it’s science.

I am on the International Council of Oversharing after sniffing a glass of wine, so for once it was nice to come away from a date and not regret telling them every single thing I’ve ever thought. Ever.

The downside of this is that you might not feel as bonded as you would do on a date where you get pissed and relax a bit and share stories. It’s like how you feel bonded to people after a shared trauma, or the first time you make proper friends with a colleague at a new job when you go out ‘for one’ after work and end up getting drunk and bitching about everyone you know. Before, you’d be in the office and nodding to them and asking how their weekend was, now you WhatsApp them across the office asking them what time you can sneak off to the pub on lunch.

You’ll feel pleased with yourself

You don’t NEED booze! You can live your life! You can date and even have sex with people when you haven’t touched a drink! You’re super human! God think of the money you’ve saved as well, you could even buy them all a present with it.

You could buy a couple of bottles of decent champagne at a nice restaurant with it, and still have enough money to get drunk afterwards, I wonder if they’re free Thursday? I hope they’re free Thursday so we can get totally and utterly leathered, take my clothes off seamlessly, like a professional stripper, and I can find out if they’ve ever had sex at a funeral.