A guide to the very British art of Peaking Too Soon

'Yeah we'll just chill out on the Friday before the big night.' 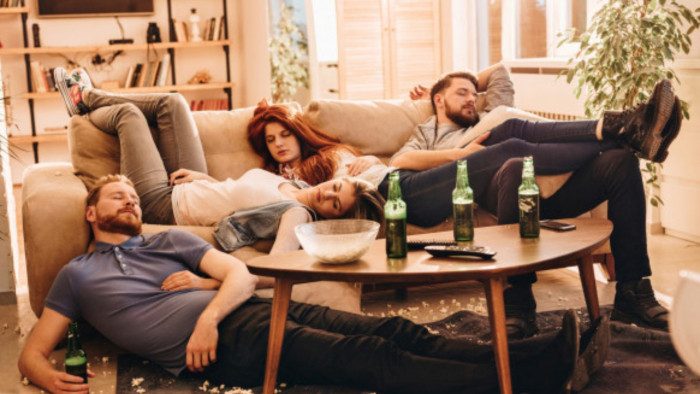 It was my birthday recently (which I have previously milked for content on this here website), and I turned 31 on a Friday. I decided that I’d get all my pals together on the Saturday for A Big Night Out, but on the Friday, just a few of us would go for a meal and generally chill out before the main event.

We’ve all done this, kidded ourselves that the night before the big do will be a quiet affair. But of course, it never is, is it? You’re probably with most of the same people, and at some point it occurs to you, that you’re an adult, you can do what you want, and actually, we all feel quite good after a few drinks, how bad would it be if we actually went out, like tonight?

My aforementioned Friday night ended up with ten people in my kitchen dancing to the Rolling Stones until someone at 3.30am slurred, “Lads we should probably call it a night, lovely meal though, see you all in sixteen hours”, a friend of a friend passed out on my stairs, (he had to be up to take his children to the cinema at 9am) and two others started daring each other to do things that involved them being asked to leave the local newsagent in the middle of the night.

I did it again, only last night. I went round to my friend’s brand new flat after work to toast her with a glass of something, before we all go out tonight for our mate’s birthday. Cut to 1am and I’m ordering an Uber, shovelling some leftover lasagne into my mouth, and telling everyone (of course everyone turned up and had the same ‘one drink’ idea) about howI think we should all ‘get into swing dancing, actually. I’ll do some research.’

So in tribute to this, very British behaviour of pre-empting The Sesh with a night that leaves you hungover for the actual event, I have chronicled all the stages of Peaking Too Soon:

“We’ll just have a few, we’ll head home after that, maybe watch a film? Get a nice take-away? We can do that can’t we? We can control ourselves for God’s sake?”

“Who’s out? Me and a couple of others are in The Rose & Crown, quite good in here, not too loud and there’s decent music on, anyone wanna come?”

You start recruiting people for your downfall. If everyone is out, then everyone will feel like shit tomorrow, and thus the bar will be set. Nobody will be the smug fresh one who did the Park Run at 9am and keeps telling you how they ‘got all their life admin done.’ You’ll all be feeling like an old sponge who can’t quite focus their eyes, and need industrial quantities of sugar and salt in order to get through the day.

“God this is nice isn’t it? Everyone was free last minute and this is turning into a really great night. We’ll still head back in a bit though, it was just nice to see everyone, and after work as well. Relaxing in a way, isn’t it? The best nights are always the unplanned ones aren’t they? Yeah.”

15 pictures of Mr. Blobby that sum up your horrible hangover

4. The Pub Dims Its Lights And Turns The Music Up And Now You Are Done For

Amazing what this can do isn’t it? You were all definitely planning on leaving in five minutes after this pint but now everything is darker, a DJ has sprung up out of nowhere, and some ‘90s hip-hop has started playing at a level which means you can’t talk to anyone anyway, so you may as well get drunk.

Someone has brought a tray of shots over because they got a pay rise (instantly negated by said tray of shots in this economic climate) and anyway you all have to do one because your mate Kate just got broken up with by a guy she was seeing for three weeks so you’re a dick if you don’t.

Another one of your mates is chatting someone up, it actually seems to be going well and suddenly it’s a club? You’re… clubbing?

“The ‘club’ is closing! Whaaaaat? It’s only 1am! Everyone back to mine! Dave make sure you get those crisps from the newsagent to soak up the 45 drinks we’ve all had. Who’s this guy? Jamie? Never met him. Why is he coming back with us? Oh OK, sure, yeah bring him along.”

There’s eight of you back at your flat dancing to a YouTube playlist and hearing Random Jamie’s stories about how he used to live in Vietnam and suddenly it’s 4am and someone says “Hey, aren’t we all supposed to be going out tonight?” and a deathly silence falls on the room.

The mist lifts, a fleet of Ubers arrive within five minutes of each other, and you’re left with a bag of expensive crisps scattered across your carpet, six very overpriced bottles of wine all opened, all half drunk at different stages, and some tins of Polish beer that you don’t ever remember seeing before in your life, and about three umbrellas that will never be picked up. You’ve fucked it.

You pick yourself up from the carpet and amble up to bed, you take three gulps of water and convince yourself that it’ll totally cancel your hangover tomorrow, and pass out.

6. The Actual Big Night Out

Nobody can get drunk and everyone wants to die, but then your other group of mates turn up and they’re like fresh blood, they didn’t go out last night! They’re… up for it? Repeat steps 2 - 5. Good luck!