Calling all Star Wars fans! You can now stay in a Stars Wars themed Airbnb

Even the toaster is in the shape of the Death Star. 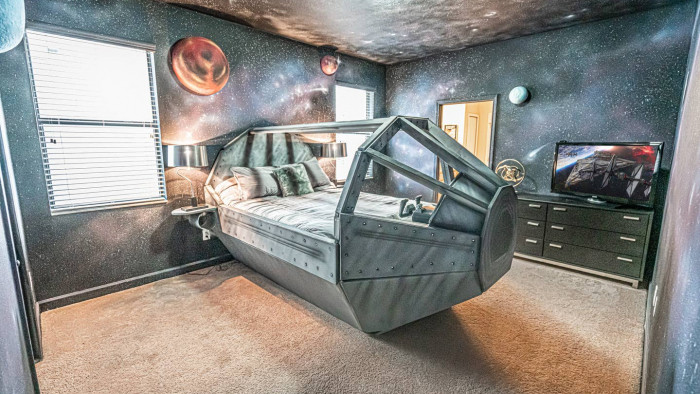 The Skywalker Saga may have ended with Star Wars: The Rise of Skywalker last year, but with The Mandalorian Season 2 on its way, and Disney continuing to expand Galaxy’s Edge with more and more attractions, the love for Star Wars still remains strong.

And, if you’re planning to venture out to Galaxy’s Edge, you’ll definitely want to consider staying in this Star Wars-themed Airbnb.

Each of the home’s nine bedrooms is inspired by a different planet or location from films including Fortress Vader, the Millennium Falcon and Yoda’s hut on Dagobah.

You won’t be able to turn a corner in Twelve Parsecs without finding a new Star Wars-related detail in the home. You’ll find a Death Star toaster in the kitchen and Stormtropper cushions chilling on the sofa.

And if you’re not already packing your bags, the host has even hidden 16 ‘easter eggs’ from the movies throughout the house.

Before you think we’re getting carried away (we are), the property isn’t officially affiliated with Disney in any way but that doesn’t detract from it looking pretty darn cool.

It also still has all the necessities you’d expect from a holiday home including a pool (filled with Star Wars inflatables, of course).

Prices start at £298 per night but considering the huge villa has 17 beds that works out at just £18pp. Put another way, that’s the same price as an all-day travelcard in London.

We imagine this Airbnb is about to get very popular.