This and That: with leaks on Fortnite and Google’s Pixel 4, to Facebook’s Portal launch 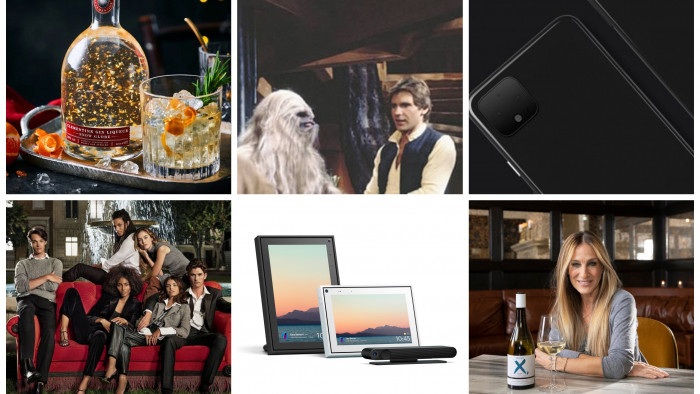 Life can be hectic at times and you can’t always have time to be checking the latest tech and entertainment news.

So, we did it for you. We’ve scoured the internet to find you what we think are the need-to-know stories of the week (admittedly, with a couple of fun ones thrown in for good measure). Either way, here are the ten stories we could not wait to share with you.

Ghostbusters’ director Ivan Reitman has finally revealed some details about the characters (and the actors playing them) in the 2020 film. The film, which continues the franchise as it follows the descendants of the original Ghostbusters, will star Paul Rudd as a teacher at a school where cast Finn Wolfhard and Mckenna Grace attend. Several of the 1984 case will also be returning, including Ernie Hudson, Sigourney Weaver and Bill Murray.

A Glasgow-based brewery has created a ‘Reforestation’ craft beer, with the hope of tackling climate change through planting trees. Drygate’s imperial stout as a punchy ABV of 11.5%, and with only 200 bottles available, it really is limited edition. For each bottle they sell, 50 trees will be planted in Madagascar, meaning a total of 10,000 trees could be planted through the beer sales. Scorched Earth costs £10 for a 330ml bottle and is available from the Brewery’s website.

This week marked the 25th anniversary of everyone’s favourite sitcom, and how best to celebrate but with a Friends-inspired clothing range. Warner Bros has teamed up with Ralph Lauren to turn Rachel Green’s iconic 90s outfits into something we might wear today. Many of the pieces are surprisingly affordable, too, with prices starting at £120. To give you a taste of what’s on offer, the collection includes a black turtleneck jumper, a red wool-blend blazer and even a jumper waistcoat.

Amazon has given its music streaming service a bit of an update, so that you can now get 50 million songs in “premium quality”. It costs just a few bob more than the standard Amazon Music subscription at £14.99 (or £12.99 if you’re a Prime member). Amazon Music HD offers “millions” of 24-bit ultra-high quality tracks, and the rest of the entire 50-million-plus song library at 16 bit/44.1kHz (also known as CD quality), beating both Spotify and Apple Music on sound quality.
Read: Amazon Music HD offers Spotify-beating sound quality

Everyone’s least favourite Star Wars film, the Holiday Special, may be getting a reboot. The 1978 special was something to behold as Bea Arthur acted as bar lady in a cantina full of aliens. Now, The Mandalorian’s creator Jon Favreau has said he wants to bring it back, telling Entertainment Tonight: “I would love to do a holiday special. I gotta pitch that to Disney Plus.”
Read: Jon Favreau wants a Star Wars Holiday Special reboot

It’s almost time for Christmas songs to be blasting in every shop on the high street, and what better way to kick off the season than with gin - more specifically a gin ‘snow globe’. The Clementine Gin Liqueur Snow Globe is a festive-flavoured gin filled with 23 carat gold leaf.
The idea is that when you turn the bottle upside down, the pieces float to create sparkles throughout the gin - like a snow globe! The gin should be available in stores next week, so if you see a bottle best snatch it up before it’s gone.
Read: This gin ‘snow globe’ is pretty much Christmas in a bottle

The launch of Google’s Pixel 4 is only a month away and social media is now being flooded with leaks around its release, including images of what is being described to be the latest Pixel 4 XL. If the images are to be trusted, the Pixel is not dissimilar to the iPhone 11 Pro, with the same square-shaped and triple-lens camera. One notable upgrade on the Pixel 4 XL is expected to be the phone’s ability to switch between 60Hz and 90Hz depending on the screen content, and new handset’s 6.23-inch screen (that’s a 3040 x 1440 resolution).
Read: Latest Google Pixel 4 leak: new colours, camera details and dynamic display

Fortnite could be getting a Batman crossover event, if what dataminers uncovered is to be trusted. A multitude of Batman assets have been found behind-the-scenes at Fortnite, including a new loading screen, a Batman banner and a wing-like Bat Glider. Two weapons were also found: an Explosive Batarang and a Batman Grapnel Gun. And, a mini-map shows that Fornite could be turning Tilted Town into Gotham City if the crossover does happen (nothing official has been confirmed, yet).

Read: The Dark Nite rises: Looks like Batman and Fortnite are getting a huge crossover

What can’t Sarah Jessica Parker do? Having already created a shoe and fragrance collection, Parker has now launched a wine called Invivo X, SJP. And, if you were wondering about the comma, it’s intentional. The ‘X, SJP’ is meant to mirror Parker’s signature sign off on Instagram - ‘X, SJ’. The Sauvignon Blanc has been created in partnership with Invivo Wines and is available exclusively at Sainsbury’s for £12.

Read: Sex and the City fans, you can now buy wine made by Sarah Jessica Parker

Facebook’s Portal - a smart home display - is finally coming to the UK - with two other devices: the Portal Mini and Portal TV. Portal - a 10-inch HD display - and the 8-inch Portal Mini are designed to allow you to video-call your friends and family, act as a digital photo frame, and can be laid portrait or landscape. The other device - Portal TV - is not a smart display itself, but rather placed under your TV to turn it into a device you can video-call from. Other features include an AI-powered Smart Camera, and apps such as Spotify, WhatsApp and Amazon Prime Video. The Portal and Portal Mini are available to pre-order now for £169 and £129 respectively, and Portal TV will be available on November 5 for £149.