Strange gadgets that may well make an appearance in 2020. 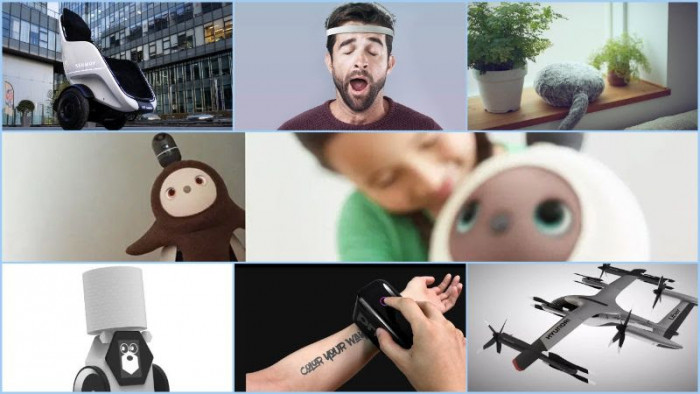 CES, as you may or may not know, brought Las Vegas to a standstill recently. It’s the place to be to spot the gadgets of the future, as thousands of tech companies and a gaggling mass of tired tech reporters head to the show to revel in all the gadgets that are coming to the world in 2020.

If you want to learn about these amazing gadgets, then we have rounded up the best tech of the show, the best new headphones, audio kit and best new TVs shown off as well.
But that’s not the best bit of the Consumer Electronics Show. The best bit is sniffing out the weird and not-so wonderful gadgets that make you go: “WTAF”.
Here’s our pick of those gadgets...

We’ve all been there, having a nice relaxing session on the toilet only to find out that some git forgot to replace the toilet roll. This leaves you with a terrible choice: do you sacrifice a sock or your pants? Well, worry no more as the true definition of a shit product has arrived. The Charmin Rollbot’s prime objective in life is to fetch you toilet paper when you have ran out. It works with Bluetooth - as long as your within 30-feet of the thing, you can summon it to supply you with fresh TP. You have to do the wiping yourself though.

Fancy a tattoo but are too lame to get something permanent on your skin that you are almost certainly going to regret later in life? Well, worry no more as the Prinker S is here. It’s essentially a portable printer for your skin. You can choose from over 5000 unique tattoo designs through the app and the machine will then zap the design you want on to your skin in just three seconds. The tattoo lasts a couple of days and will stop you from having a starring role in Just The Tattoo Of Us.

Remember the fat humans in Wall-E who all roll around in strange machines, instead of walking around? Well, that will be us in a few years as the Segway S-Pod is pretty much that. To be fair to Segway, they are pitching it as an electronic wheelchair, despite the obvious Wall-E connotations. Given the prototype smashed into a wall at this year’s CES, though, we reckon it might be going back to the drawing board before it goes on sale.

And there was you thinking that Uber Select was the fanciest way to get around town. Well, the SA-1 urban air taxi is the ultimate way to travel and Hyundai, who has teamed up with Uber to create it, reckon flights will be available from 2023. We guarantee the pilots still won’t go from Central London to Bromley, though.

Want a good night’s sleep? Then strapping the URGONight to your head will deliver a better snooze. This is according to its makers who reckon that URGONight “encourages your brain to naturally produce more of the sleep-positive brainwaves associated with better sleep”. Shame it looks a bit like a medical experiment gone wrong.

We’re betting that you will not love Lovot. Yes, it’s a cute Japanese robot that really want to be your companion and ‘change how you feel’. But the only thing we are feeling are its beady eyes burrowing into our brain. Seriously, we can see this toy hitting the headlines for all the wrong reasons as it’s a smart doll that’s not pre-programmed but “uses deep learning technology to register behavior and respond accordingly”. We’ve seen Child’s Play, this is not going to end well.

The Qoobo is “a tail cushion that heals your heart”. No, that’s not code for some sex thing but a whole new brand of something called “tail therapy”. According to its makers: “Qoobo is a therapeutic robot in the form of a cushion with a tail. When caressed, it waves gently. When rubbed, it swings playfully. And, it occasionally wags just to say hello.” Okay, when you put it like that, it definitely sounds like a sex thing.