Star Wars: Episode IX is here - this is what we think. 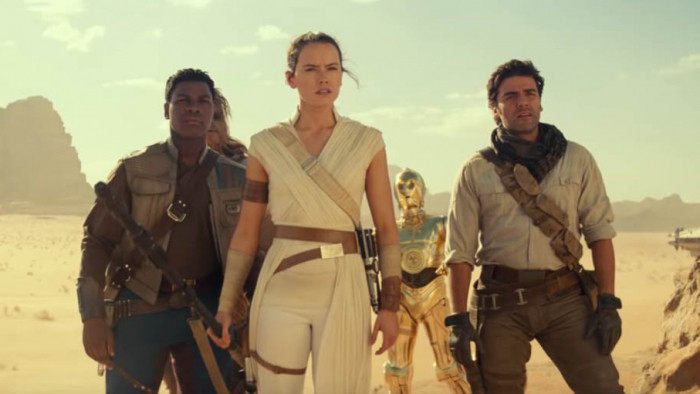 Grab a blue milk and settle in for one last adventure across the galaxy with the gang: The Skywalker saga finally hits its long-anticipated conclusion this week, as Star Wars: The Rise Of Skywalker storms into cinemas on 19 December.

Since changing the face of blockbusters and pop-culture itself, the film will draw to a close the 42-year spanning story of the galaxy’s favourite heroes, including Luke, Leia, Han and Chewie, and conclude the drama of the latest generation of characters, Kylo Ren, Rey and Finn.

Star Wars: The Force Awakens’ J.J. Abrams returns to direct the final chapter in the space opera, bringing the recent trilogy, and the ninth film in the canon series, to its epic finale.

Battles will be fought. Droids will be discovered. Long-debated fan theories will be answered. Or will they?

Before you make your own last quest into the galaxy far, far, away to find out for yourself, here are five, handy things to know about the new movie. And don’t worry, you can put down your saber and turn the spoiler alert off.

Daisy Ridley’s performance as Jedi Rey, fighting to resist the dark side, as seen in the movie’s trailer, and Adam Driver as understated, tormented Supreme Leader Kylo Ren are standouts; their chemistry reverberating through the cinema as much as through the galaxy. Reylo fans will be excited to hear that the two share a fair amount of screen time, too. John Boyega’s Finn and Oscar Isaac’s Poe are along for the adventure across the galaxy for most of the time, too, but don’t get as much opportunity to shine in its finale, instead providing moments of comic relief and Han Solo-shaped Indiana Jones-vibes respectively.

No one’s ever really gone. Especially when force ghosts are a thing. In one of the trailer’s most emotional moments, Poe Dameron asks C-3PO, surrounded by wires, what he is doing. "Taking one last look, Sir, at my friends,” the iconic droid replies - and there are a lot of friends in space and time to say goodbye to in this saga. Fans of the franchise will be glad to know their old favourites might pop up again along the way. And Porgs make a brief, welcome appearance. That’s not a spoiler, that’s just a relief. We didn’t buy all those plushies for nothing.

3. The Force is strong – and really cool

With Rey’s Jedi training polishing her skills, and Kylo Ren more powerful than ever, the two warring sides are both stronger than they ever have been before, and that makes for Jedi moves cooler than Hoth. The pair’s Force-bond will give some of the most exciting confrontations in the trilogy.

Tying up the loose ends of all the previous films was always going to be tricky, and that leads a to a significant amount of exposition in this one. Add to that explosive action setpieces, lots of planet-hopping, multiple lightsaber duels, and the introduction of new characters, too (miniature hero Babu Frik is going to inspire Baby Yoda-levels of devotion) and there’s a lot to cover in the space of one film. But as fans of J.J. Abram’s ‘Lost’ will know, sometimes not everything gets an answer.

5. A fitting end to the saga

The battle between the Jedi and Sith, of the Empire and Resistance, of hope and despair across the galaxy, will be explored in a way which will delight fans of the original movies, with the final episode loaded full of nostalgia, and enough callbacks to the original trilogy to Jedi force-push you back into 1977. Specific moments will have you applauding – and gasping – and we’d expect no less from the ending to cinema’s most iconic series.

- Star Wars: The Rise Of Skywalker is released in cinemas 19 December 2019.