And we get a great, new glimpse of Dancing Groot 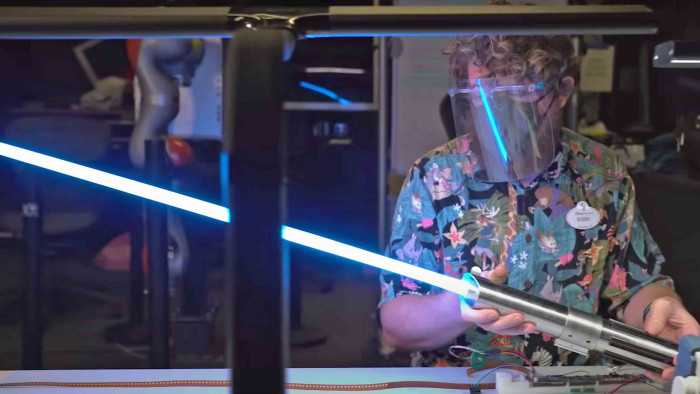 Disney's theme parks may have been closed because of Covid-19 but that doesn't mean that some fantastic innovation hasn't been happening behind the scenes.

We first got a sniff of the working lightsaber back in April, when the head of Disney Parks Josh D’Amaro showed one off at a virtual showcase.

This was unfortunately behind closed doors but, in May, Disney revealed that it had a new Galactic Starcruiser event that opens in 2022. And guess what the star attraction of that event it? Yep, a working lightsaber.

Skip a few months and we haven't seen the lightsaber in action since, but a new Walt Disney Imagineering Innovation Showcase video has been released and we get another fantastic glimpse of the lightsaber (43 seconds in), as well as the amazing animatronic dancing Kid Groot the Mouse House has created.

In fact, the whole video is worth a watch as it is packed with Droids, some new Avatar characters and a ridiculously lifelike Davy Jones from The Pirates of the Caribbean.

The video has been released to celebrate Walt Disney Imagineering as being given the Best Workplace for Innovators award by Fast Company magazine.

In a blog about the accolade, it notes: “When people come to visit Disney, they want to enter a world where anything is possible,” says Josh Gorin, who leads Imagineering’s Blue Sky and Creative Strategy.

“As Imagineers, it is our challenge to apply both creative and technical skills to make that magical world come to life. We have to keep upping our game - that means innovation in storytelling and technology.”

There's only one we are interested in, though: give us a go on that working lightsaber right now!