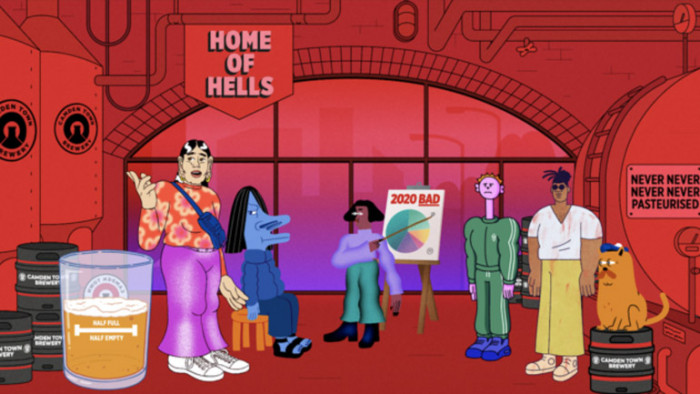 Because the world is still a bit of a horror show right now, you would be forgiven for forgetting that the Champion's League semi finals are this week. The Champion's League this year is a strange one. It's the first since 1996 without an English or Spanish team set for the final, and the first to be played without fans.

Given the football is usually a time you head down the pub with your mates, it may also feel a little strange stuck at home watching the games on your own telly. Camden Town Brewery is hoping to add a little bit of fun to proceedings, though, with what it is calling the first 'drinkable' beer ad.

Let's get the small print out the way: you definitely can't drink the advert, which will be shown during the Champions League semi final, but there will a QR code for you to scan with the chance of winning a pack of Camden Hells.

In total it is giving away 45,000 cans and the ad will be shown during both Champions League semi finals (shown the 18th and 19th August) and the final on the 23rd August.

Speaking about its beer blowout, Jasper Cuppaidge, Founder of Camden Town Brewery said: “2020 has been a tough year for everyone... we wanted to give back to the great British public by offering them the chance to (finally!) share a free, fresh and socially distanced beer with friends. We know it’s a small gesture, but we hope to bring some much needed cheers in the very best way we know how – with fresh beer!"

If you are looking for other beers to drink while watching the footie, then head to our best craft beers guide. You might also want to head to our best football boots list, if you now have an urge for a kickaround.