Ben & Jerry’s is releasing a mouthwatering pair of trainers

Inspired by cows, of course. 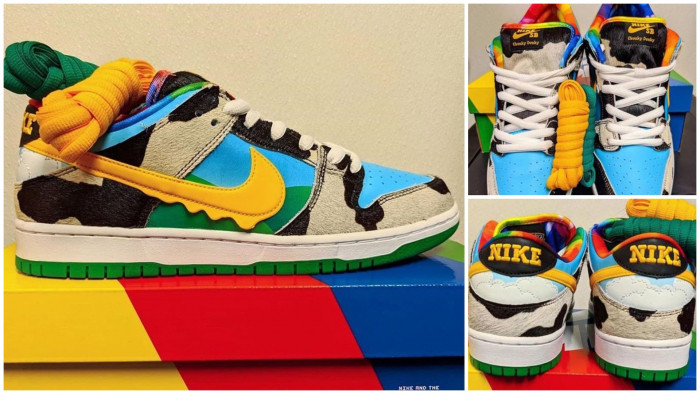 Ben & Jerry’s is one of the world’s favourite ice cream brands thanks to its OTT flavours and collaborations with other much loved brands including their recently launched Netflix & Chilll'd.

However, their latest collaboration isn’t for a new wittily-named ice cream flavour, but a pair of trainers.

The trainers are a collaboration between the ice cream gurus and Nike and while they’re not available quite yet, the first images of shoes have been leaked.

The photos have been shared by 94_sbchef (via Hypebeast) and the trainers are definitely bold. The blue skies and rolling hills found on the front of most Ben & Jerry’s tubs feature heavily but are somewhat overshadowed by the cow print.

If that wasn’t enough, there are white fluffy clouds found on the heel, a melting yellow tick and a vibrant rainbow lining inside the shoes.

It seems this style of the Nike SB Dunk Low has been named ‘Chunky Dunky’, which can be seen written on the tongue.

The name that seems to be inspired by the classic banana, walnut and fudge flavour ‘Chunky Monkey’.

There’s no release date or prices just yet, but we suggest keeping an eye on their socials for any news.