It's time for another out-of-this-world Adidas collaboration 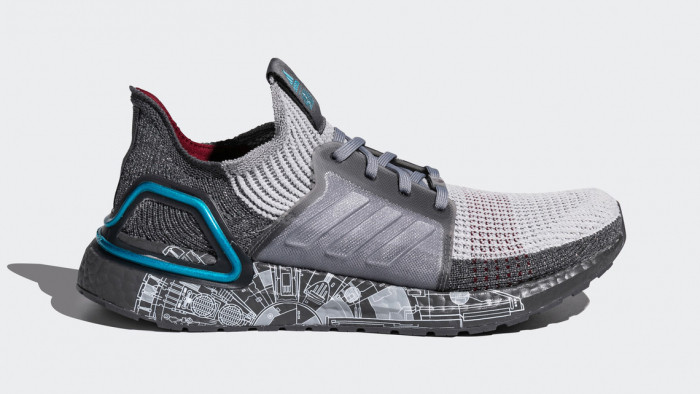 As a nation of Stars Wars obsessives, the truth is we’ll snap up any force-themed collaboration that comes our way. These Star Wars x adidas UltraBoost’s are no exception.

WIth Star Wars fever at an all-time high thanks to the recent release of Disney+ show The Mandalorian and the forthcoming franchise addition The RIse of Skywalker, it was only a matter of time before the merchandise floodgates opened.

The thing is, we actually really want to get our hands on this latest release.

Inspired by the fictional starship and flag-bearer of the rebel alliance, these Adidas UltraBoost 2019 “Millennium Falcon” trainers might just make for the ultimate brand collaboration.

Featuring a dark grey all-over design contrasted with a white primeknit upper, the trainers leave you in no doubt as to the collaboration thanks to some pretty distinctive graphics.

The midsole boasts a detailed Falcon-themed design that is sure to help you to awaken the force, depicting what looks to be a blueprint of the legendary ship across the length of the sole.

There’s also a pop of colour for those who aren’t fans of monochrome, as the kicks feature a bright blue tongue and heel trim, alongside a burgundy interior.

The limited-edition sneakers are expected to drop on the adidas store and selected retailers on 21 November and will cost $190 (around £145).

In the mood to pound those pavements? Discover our pick of the best running shoes 2019