7 things you need to know about Gangs Of London, according to its lead actors 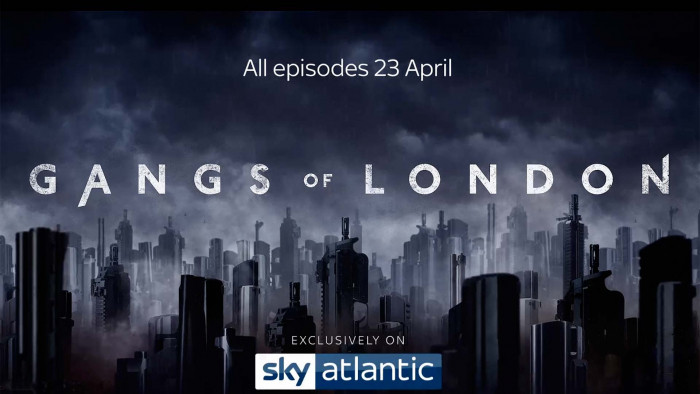 Brace yourself: a new gang drama is coming to Sky Atlantic. In it you’ll see pub fights even more brutal than in your local Wetherspoons. Seriously, you’ll be shocked at what these guys can do with a dart.

Gangs of London is the spectacular new drama from action maestro Gareth Evans - the director of The Raid and The Raid 2.

Evans is responsible for bringing incredible Indonesian martial arts action to mainstream Western cinema. Now he’s bringing that intricate fight choreography to the streets of London, in a unique east-meets-west style that pushes the boundaries of action on the small screen.

Set in a fantastical modern-day London, the impressive high-production series follows rival gangs in the capital, and the ensuing chaos and shifting powers in the wake of the death of a criminal kingpin.

Joe Cole (Peaky Blinders) plays the son of said assassinated gangster, left to avenge his death and take over the family business. Sope Dirisu (Royal Shakespeare Company) plays a newcomer to the gang, Elliot Finch - a mysterious ex-military man with amazing boxing-inspired fighting skills. They star alongside an acclaimed cast including Lucian Msamati, Michelle Fairley and Colm J. Meaney, who also make up the crime families.

“It’s a dynamic snapshot into how dark the world's most cosmopolitan city can be,” star Sope Dirisu tells ShortList when we sit down with him and Joe Cole to get all the behind-the-scenes details before the series premieres.

Here’s what you need to know about your next telly obsession. Seriously, you won’t have seen bar fights like this before…

The fight scenes are unlike anything you’ve seen before

“[The fight scenes] are Eastern-inspired, and I suppose that comes directly from Gareth and [co-creator] Matt Flannery’s work on their ‘The Raid’ and ‘Merantau’ films, which use Pencak Silat and other martial arts methods that were inspired from Indonesia, Malaysia and the Far East.

"They've definitely brought their influences from that body of work over into creating their fightscape of ‘Gangs Of London’,” explains Dirisu, “So whilst we have Hollywood-esque, grand, operatic themes of the show, we are merging East and West in terms of the way we display the fights.”

The show’s fight scenes are shot in an unusual way

“The atmosphere on set when we were filming the fight scenes was always excellent and really jovial. One of the reasons for that was because Gareth edits the fight scene as you're shooting it,” says Dirisu, explaining the innovative way Evans works, “He has worked with the stunt coordinator and stunt men well before pre-production starts to create a pre-visual, and what the fight is gonna look like."

"He knows what the choreography is, he knows exactly how he's going to cover it. He shoots each moment of coverage in order, and then, whilst they're setting up the next shot, he will splice it together in a very rough but accurate version of what the fight scene is going to look like. So it's really heartening for everybody on set to be able to see how far we've come and how far we've got left to shoot.”

“It's really like a completion percentage bar - as you get close to the end, you get more and more excited to see the complete fight scene, and with no green screens or random people popping up in the pre-vis. Once you've got this whole thing in place, you can look back on your work and be really proud of it immediately on the day that you've been shooting it.”

Filming this series was about as mind-blowing as filming gets

“This felt like we were kids in a candy shop. I remember the first day I got on set, we were shooting this massive, epic shootout with explosions, and blanks being fired left, right and centre, squibs going off, all sorts of people driving around on mopeds with rocket launchers getting shot. I thought, ‘Oh my god, I have really arrived here!’ - that this is why I got into acting and I didn't know it,” reveals Joe Cole.

It’s not all action: The show is also about family dynamics and gang drama

“As well as some cool set pieces, the show is about real drama and real family dynamics," says Cole.

"At the heart of the story, it's about a family who have been torn apart by the death of the father, who is the biggest gangster in the UK, and is assassinated at the beginning of the first episode.”

“I play his public school-educated son who is thrown into the hot seat, and is trying to find out who has killed his dad, but is also trying to keep the ship steady as all these different gangs close in to try and seize power and take control.”

Cole explains that it’s not all action: “There's a lot of skeletons in the closet, and a lot of demons. There are severe things that have gone on in the past which are being uncovered and unravelled. And at the heart of the show, you see that you see how that might pull the family apart and bring them closer together.”

Expect to be shocked by the, erm, creative methods of violence

“Bro, when you have my man hanging off the edge of the building,” says Dirisu to Cole, “you could just leave him there. But you’re not even just cut the rope he’s hanging on. You set the rope on fire, set him on fire, then let him fall to his death. Which one of those three things is gonna kill him? Yeah, that's the most violent thing that I've seen in ‘Gangs of London’ so far. Definitely."

He's talking about the show’s opener, which sees gangster Sean Wallace torturing a man by dangling him over the edge of a skyscaper.

“Yeah, that’s probably the most insane one,” agrees Cole, “They had a stunt guy that they took to the top of this rig in a studio, and they set fire to him. They doused him in some sort of ethanol, they'd shout, ‘Three, two, one!’, he held his breath, they set fire to him, dropped him off this rig, hanging upside down, at full pelt, which they have slowed down in post-production, and he lands at the bottom and has to keep his breath held the whole time while he's upside down. When he lands, firefighters come in blast him with extinguishers and he's gasping, and everyone’s like, ‘Are you ready to go again?’ and he’s like, ‘Yeah, get me back up there!’”

The cast had to do ‘fight tests’ to get their roles

“When I turned up for my fight test, I didn't know what one was either,” says Dirisu, “but, thankfully, it wasn't a case of, here's a bear, wrestle it and see if you can fight! They showed me a bit of choreography and asked me to repeat it, to see if I could take direction. And thankfully, it was a success. It was really encouraging to hear that both Jude Poyer the fight choreographer, and Chris Webb, who he worked with to design the action, seemed to have a lot of faith in my ability, which made me which gave me more confidence to go on set and do the wonderful sequences that they had created.”

“My character Elliot's father was a boxer,” Dirisu tells us, “so Elliot has a good understanding of the boxing fighting style. And then as we've mentioned before, there's a real Eastern influence that Matt and Gareth brought from Indonesia, and the fights scenes that they like to watch are inspired by Jackie Chan and East Asian action films. Their sensibilities are rooted in martial arts.”

“It would never have been right for Elliot to be fighting like a kung fu star because that wasn't his background. but there are ways of getting out of situations that may appear martial art-like, because they may have come from that idea, but they're all grounded in what he, as an ex-soldier, and the son of a boxer, would have been exposed to. The hand-to-hand combat that you learn as a soldier is super prevalent in all of his fight scenes.”

All nine episodes of ‘Gangs of London’ will be available to watch on the 23 April on Sky Atlantic.