From games to accessories - these are the best Xbox One deals we found so far. 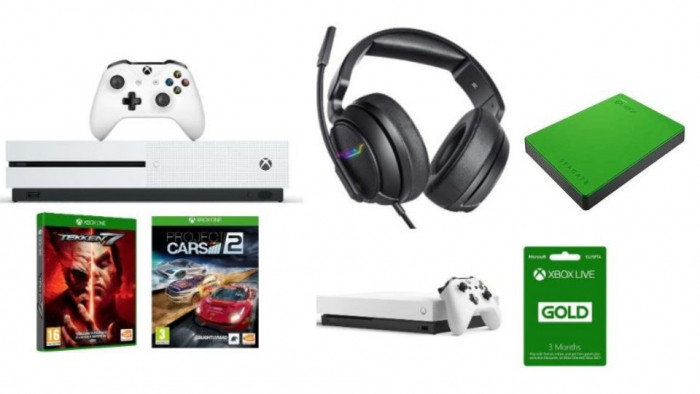 We all know Black Friday 2019 had some of the biggest bargain bonanza around - but there are bargains to be had, thanks to Cyber Monday.

Gaming is one area that’s likely to see some pretty impressive offers - particularly where accessories and bundles are concerned. That's why we also have guides for the best PS4 deals for you too.

We’ve spent countless hours sniffing out the best Black Friday 2019 Xbox One deals so far, so you don’t have to.

From standalone consoles to out-of-this-world games discounts, there’s sure to be an offer to suit every kind of gamer - particularly when it comes to Xbox One offers.

So, whether you’re into single player games with plenty of levels or are more of a battle royale style player, there’s bound to be something here for you.

While you’re at it, if you’re after other console bargains, it might also be worth keeping an eye on our Best Nintendo Switch deals hub page.

Xbox One X with Star Wars Jedi: Fallen Order Bundle
£299.00
This is one of the best Xbox One X deals we have seen yet. Not only do you get the brand-new Jedi Fallen order in the bundle but two months' worth of NOW TV as well - all for under £300 (a quid under, but still under).
Buy now from Game

All other Xbox One Cyber Monday Deals

Xbox One S 1TB All Digital Console Fortnite & 2 Game Bundle
£129.99
Save £70 when you buy this Xbox One S Digital bundle. The deal includes the All Digital Console, a wireless controller, a 1-month Xbox Live Gold subscription and three games - Fortnite, Sea of Thieves and Minecraft - all for just £129.99.
Buy now at Argos
35% off

Xbox One S All Digital Edition Console & 3 Game Bundle
£129.99
This Xbox One S Digital bundle is now only £129.99. In it you get the All Digital Console, a wireless controller, a 1-month Xbox Live Gold subscription and three games - Minecraft, Forza Horizon 3 and Sea of Thieves. Plus, a 2-year manufacturer’s guarantee.
Buy now at Argos
27% off

Xbox One S 1TB All Digital Console 3 Game & FIFA 20 Bundle
£189.99
This Xbox One S All Digital bundle includes four games including FIFA 20. You also get Minecraft, Sea of Thieves and Forza Horizon 3, all for less than £190.
Buy now at Argos
save £150

Xbox One X Gears 5 bundle
£299.00
Don't want a boring standard Xbox One X? This Gears 5 special edition bundle includes the entire Gears series plus Tekken 7, Project Cars 2 and six months of Spotify Premium. Currys sells the console without the extras at the same price.
Buy now from Currys
save £150

Xbox One X Lego bundle
£299.00
Game goes a bit further than most with its Xbox One X bundles. You get Forza Horizon 4 and the Lego expansion, plus a Lego Mclaren Senna set and two months of Now TV's Entertainment service.
Buy now from Game
23% off

Tom Clancy's The Division 2 (Gold Edition)
£21.99 (was £49.99)
In this second instalment, the Division has shifted its attention to Washington D.C. and The White House has become your new Base of Operations. The Gold Edition also includes exclusive customisation items and additional activities - all for the price of £22.99 (saving you over £7).
Buy now from Amazon
39% off

Call of Duty: Black Ops 4
£14.99
This version of the game includes an exclusive Calling Card and 2 hours of 2XP (experience points), and chronically takes place between Black Ops II and III. Now for less than £20, Black Ops 4 has three different modes of play - multiplayer, zombies and blackout.
Buy now from Amazon
50% off

Xiberia Xbox one Headset
£19.99
If you've been after a gaming headset and mic for some time, Black Friday might be the very occasion to invest. This Xiberia offering caught our eye with a massive 50% off at present - but be quick, it could end at any time.
View now on Amazon
26% off

Seagate 2 TB Game Drive for Xbox
£62.99
It's bold, it's green, it'll help you continue your gaming missions by supplying you with plenty of memory. Yes, this 2 TB game drive has 18% off at present, bringing the price down to under £63.
View now on Amazon
17% off