The Grand Tour: Seamen is here - 10 things you need to know

From boats to bicycles, the trio try it all 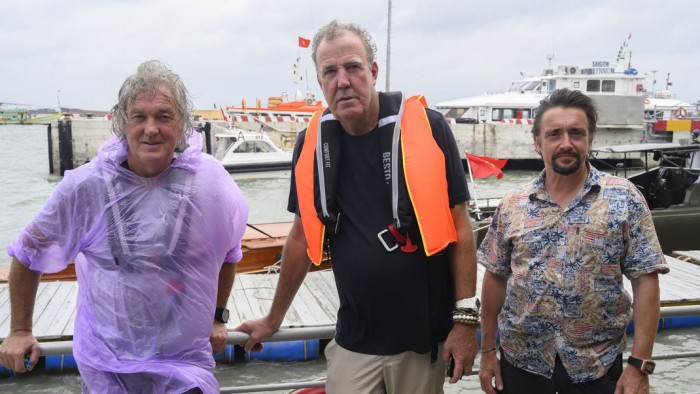 The Grand Tour is back and, well, there aren’t any cars in it. There’s also only one episode, and Clarkson even addresses climate change without a single joke or raised eyebrow.

Having bid a tearful farewell to the live studio format which Jeremy Clarkson, Richard Hammond and James May have called home for the past 17 years, the end of series three of The Grand Tour marked a turning point.

This is partly because writing scripts, interviewing guests and testing cars took up a lot of time, but also because today’s audience just isn’t into cars the way it was a decade ago.

Now, it’s all about the adventure; the special, beautifully-shot, hour-plus episodes where the three go in search of a travel documentary, then crash, fall over and generally make a complete hash of it. Only this time, things are a little more grown up. To explain, here are ten things you need to know about the new series of The Grand Tour.

Much to Clarkson’s disappointment that the new episode isn’t going out on election night, The Grand Tour presents: Seamen (yes, that’s the official name, quiet at the back) hits Amazon Prime Video a day later, on Friday 13 December - which means it is live now.

But don’t be expecting episode two a week later, because instead of eight or 10 shows to sink our teeth into, the new ‘series’ is just two episodes. The first is an adventure through Cambodia and Vietnam, and the second, due out sometime next year, is in Madagascar.

These will be followed by two more adventures, likely towards the end of 2020 and start of 2021.

These episodes are shot entirely on location, with no studio. As for the location of the old tent, May reckons it’s in the attic somewhere

On missing the studio and live audience to chuck insults at, Clarkson said: “It was fun and I liked it, but honestly, because I was the one to research the guests, prepare the questions and the news, and almost always do the car test, there was a lot of work. Now that’s gone away I can actually see the children occasionally.”

May also admits he misses the old days, but now realises the adventure specials are what works best, both for the presenters and their audience. “I do slightly miss the live audience because I like the stimulus of a live performance...but, you know, let’s assume it’s a straight choice - a studio run or specials - I think we are better doing specials because it’s what we do best...we know that’s what the audience likes."

3. There are no cars, either

No, really; this adventure special features no cars at all. Instead it’s all about boats, and Clarkson explains why: “I chose boats simply because the other two hate them. They made me go across Vietnam once on a motorcycle, which I hated, and we’ve done lorries, which I hated, so I thought it was time for some payback, and these two could use a mode of transport they don’t like.”

Although there are no cars, the boats still arrive in the same presenter-chosen format we’re used to. This, of course, means Clarkson opts for a £100,000 replica of the PBR boat used by the US Navy in the Vietnam War, Hammond picks a Miami Vice-style speedboat modestly called Razzle Dazzle, and May goes for a 1930s craft which has more in common with your grandmother’s sideboard than a boat.

May digs a little deeper into why shifting the focus away from cars is no bad thing. “It’s a narrowing audience [who enjoy car reviews] and also that need is being fulfilled by a lot more people these days...YouTube is full of car reviews...so we’re sort of slightly redundant on that side of things.”

Hammond adds: “It would be difficult to do a show just evaluating and reviewing cars now because the current generation aren’t fussed, it’s not their thing.”

The next Grand Tour special in Madagascar does use cars, but May says: “We aren’t reviewing them, we are using them as a means of having an adventure and a laugh.”

On arriving in what is supposed to be the rainy season, The Grand Tour’s 70-plus crew found Cambodia’s Tonle Sap lake had all but tried up, as the river which feeds it - the only one in the world which changes direction - was not flowing as normal.

Clarkson explained: “It’s very difficult to move [The Grand Tour] around, and so we monitored the weather and it should have been pouring with rain, [the lake] should have been five times bigger than it was, and it simply wasn’t. We just had to set off knowing it hadn’t filled up...it was damn near empty.”

Addressing how climate change had likely caused this, Clarkson added: “While it’s very easy to say the Chinese dams are responsible, they’ve only contributed to it. There is no question, and we admitted to it for the first time ever on one of our shows, that there may be such a thing as climate change.”

As well as bringing the climate change debate to The Grand Tour for the first time, Clarkson is also doing his bit back in the UK too, while shooting a new series for Amazon about his Oxfordshire farm.

“I’m completely carbon neutral,” the presenter said proudly. “I’ve a thousand-acre farm and plant hundreds of trees every year and grow crops, so I’ve got no carbon footprint at all. Quite the opposite. [CO2 created by The Grand Tour] is nothing compared to what I’m soaking up with the farm. Nothing.

You could argue the old studio format was running thin on new material, and although the trio will never quite agree on that, May said how being apart injected some life back into their relationship.

“We went quite a long time without seeing each other [after the last series] or even speaking to each other before we made this programme. I was off making my Japan show [Our Man In Japan, also coming to Amazon], Jeremy was on his long holiday in South East Asia, Hammond was working on some other stuff back in England, and I don’t think we even texted each other in that time. So when we finally got back together it was with some horror, obviously, but it also meant we had saved up all our capacity for mocking each other...It gave us a new energy.”

He might not have a massive shunt attended by an air ambulance this time around, but Hammond still gets himself into plenty of trouble. Without giving too much away, the episode finale sees the thrio venture out to sea in their completely un-seaworthy vessels, with the finish line 30 miles away.

It’s a harrowing journey Clarkson says took hours and which Hammond ranks “in the top three worst things I’ve ever done,” along with crashing off a Swiss mountain, and having a dragster tyre blow at over 300mph.

Hammond adds: “It was bloody horrible. Because I don’t know anything about boats, I don’t know if my boat should be doing what it was doing...especially when I thought I was going to go over backwards. We were all bloody uncomfortable.”

Asked if he thought they were in real trouble, May admits with humility: “Yeah, I think we were actually. I didn’t realise it as much at the time...But it was, yeah, it was pretty tough. I was just thinking, I must get to the other side...you can see the difference between someone who is really worried and someone who is just pulling a face.”

Clarkson, who has held a boat licence for decades, had an easier time of it, but recognises the dangers of producing a television show like The Grand Tour. “It was really uncomfortable, horrible...I don’t care about James and Richard, but the camera crew and the production teams, they were really quite scared. Those boats were sinking. Four fishermen drowned in that storm right where we were.”

Shifting away from the studio also brings with it a sense of The Grand Tour growing up. There are no cringe-worthy jokes written to provoke controversy, and the situations the trio haphazardly get themselves into all feel refreshingly genuine.

Clarkson in-particular harks back to his documentary making days, taking the audience aside on a couple of occasions to tell stories related to the journey. It’s the kind of material that would clutter the cutting room floor of a programme governed by a strict 58-minute time slot, but the flexibility of online TV without adverts and schedules gives the show space to breathe, and it benefits as a result.

On adding education into the mix, Clarkson said: “I was interested in my boat’s story and I thought there was a nice couple of little stories in there...I just thought if something is interesting and provides entertainment, I’ll try and put it in...that’s all I’m here to do.”

As much as they like to say they merely tolerate each other, there’s no escaping that their relationship is The Grand Tour’s key ingredient. Despite the lack of cars, Clarkson says: “It’s still us and we still bicker and we still laugh a lot. When the cameras are turned off, the laughter doesn’t really stop...That shines through in the programme and we do have the benefit of having worked together for 17 years, you really can’t mimic that.”

May, unsurprisingly, is less keen to praise their chemistry. “Hate is a strong word, but we do tolerate each other.”

When asked to state a positive aspect of each of his colleagues, May, ever keen to maintain the veil of displeasure, says bluntly: “Jeremy has lost a bit of weight recently, and Richard Hammond hasn’t almost killed himself recently. There you go, those are two positives.”

But they still speak fondly of their old show, Clarkson especially: “I wish them all the very best, but I don’t watch it. It was my baby, then it got taken away and they’ve got it now. It’s like if you have a baby and it’s put up for adoption, you hope the baby is brought up very well but you don’t go and look through the curtains every night. That’s really how I feel.”

The Grand Tour presents: Seamen is available on Amazon Prime Video now - read our exclusive interview with James May.