Exclusive: James May's best-ever builds and what he wants to make next

May exclusively chats The Grand Tour and all about his love for making things. 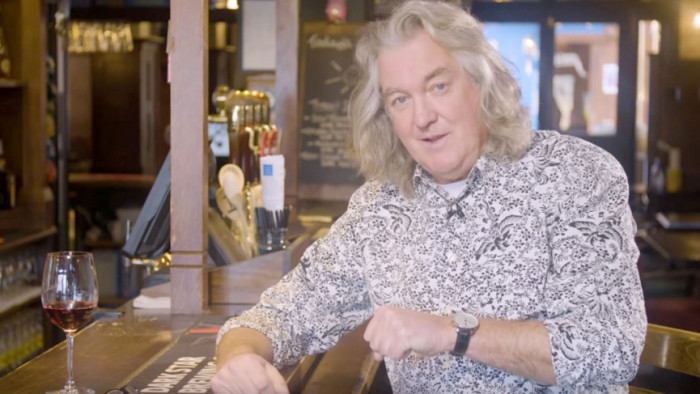 A new episode of The Grand Tour about has hit Amazon Prime Video and, to celebrate this fact, we got the chance to sit down with James May to discuss the show, but also his love of making things.

Away from driving fast cars slowly, resembling a spaniel in a wind tunnel, and being the butt of an endless barrage of jokes by Jeremy Clarkson and Richard Hammond, James May is surely the one you’d go to the pub with.
He’s the sensible and approachable one of the three. The bloke you could have a good chat with, as we found out.
We begin - where else? - chatting about cars. May recently began experimenting with electric, having purchased a Tesla Model S and leased a hydrogen-powered Toyota Mirai. “My daily driving is electric. I’m not evangelical about it, I’m genuinely interested to see what it’s like and how it works out... People have to try it and test it out. It was the same with cars themselves in the early days and it was the same with VHS recorders, aeroplanes, digital cameras, telephones,” he says.
Don’t worry, petrolheads. He’s still got his Ferrari 458 Speciale and Alpine A110, but may recognises how the industry is changing, and the love of cars Top Gear’s audience had a decade ago is waning.
“These special episodes [of The Grand Tour], this one wasn’t about cars at all, and although for the next one we are in cars, they are sort of part-car show, part-slapstick circus and part-travelogue. The degree that it is about cars per se is shrivelling.”
May says it isn’t the cars that make their show work anymore, but the sense of adventure and the trouble they inevitably (but not deliberately, he insists) get themselves into along the way.
The new episode features the trio taking three boats from Cambodia to Vietnam along the Tonle Sap river. But climate change, the presenters say themselves, means the rainy season is baking hot, the river isn’t flowing properly, and a lake they wanted to speed across was barely knee-deep. Later in the episode, the three face one of their toughest challenges yet as they cross a 30-mile stretch of open sea, with near-disastrous consequences.
May said: “We had to get out and clear propellers, then we went the wrong way and ended up in a dead end, then had the perilous sea crossing, which we didn’t know we were going to have to do, I think that’s what actually makes it work as a piece of telly. In a way we were lucky. We were lucky that it went so wrong.”
Away from The Grand Tour, and previously Top Gear, May is a lover of construction. Whether it be a shelf and a cupboard, a full-size Airfix model of a Spitfire, or a motorcycle made from Meccano, May is a man happiest when tinkering away in his garage.
Here’s a list of things James May has built over the years, and what he plans to build next...

“I built a Caterham. Well, that’s an assembly job,” May says dismissively of the Caterham 7 he and his Top Gear colleagues built a decade ago. The challenge was for the three of them to build (sorry, assemble) the Caterham at a racetrack in Scotland and complete a lap before the Stig could drive there in an identical car from TG headquarters in Surrey.

“There’s a little steam engine that I made out of metal - I quite like making things out of metal. And there’s a couple of very terrible paintings that I did, and I’ve made some terrible curries and pasta dishes. But I do enjoy making things. When I retire I will probably not go anywhere, I will stay at home and make things.”

“Although I’m a great fan of the modern world and the digital era, and I like iPads and computers, all that sort of thing, as a sort of therapy I like working with hand tools. I would like to make a jewellery box out of wood, or try and do a little watercolour picture. Or I’ve got a small lathe and metal working tools and I will mend things.
“This is a weird thing but people are into it, they use tools to make more tools. We do a lot of that.”

4. Stuff for the house

“I quite like making things. Our little country cottage that we’ve got has in it, that I’ve made, a shelving unit, a couple of benches, some storage boxes…”

As you can probably tell by now, it’s an eclectic list to say the least. And it goes on: “I’ve made a measuring device. I’ve made a couple of those little steam engines. There’s all sorts of bits of crap around the place that I’ve made, but I can’t throw them away.”

6. A full-size Airfix Spitfire, a Lego house and a Meccano motorbike

As part of his TV series Toy Stories, May helped with a wide range of toy-based projects.
There was a full-size Spitfire made like an Airfix model kit, a plasticine garden entered into the Chelsea Flower Show; a 23-metre long, half-tonne Meccano bridge; a three-mile-long Scalextric race track which followed the pre-war Brooklands circuit; a Lego house made from 3.3 million bricks which May slept in for a night, and a full-size motorbike and sidecar made from Meccano, complete with working electric motor.
“The Meccano motorcycle, that’s in my garage. I sit and look at it and think ‘what the hell is that doing here?’. I enjoy all that stuff, I think it satisfies a constructive and creative urge. It’s one of the great differences between me and Clarkson; he’s not interested in anything like that and can’t do it.
“Sometimes he struggles to open a door, so I have to do it for him, and I have to set his phone up for him. We are very different.”

7. A garden building and a boat

When asked what May fancies building in the future, his dreams are equally varied. “I’d like to build a small house. A garden building, I think I’d like to do that. I’ve never done any bricklaying but I’ve watched it a lot, so I’d like to do a part-brick, part-wood garden den. I’ve also always quite fancied building a wooden boat, too.”

"I’ve always wanted to build a harpsichord, that’s something I’ve wanted to do since I was young," May reveals. "I know a man who does make them professionally now, so I might do that and film it and it’ll be a piece of slow TV. No speaking, just days and days, then right at the end I’ll play a small tune.”
The Grand Tour presents: Seamen is available now on Amazon Prime Video from Friday 13th December. Sign up for 30 days' free Amazon Prime now.