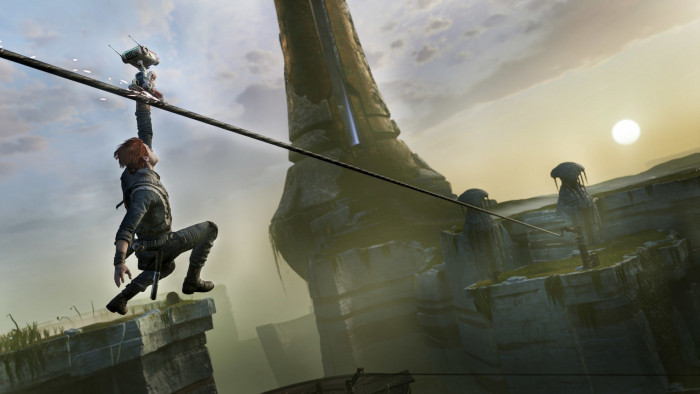 It’s fair to say that recent Star Wars video games have not always been well-received, with games such as Star Wars: Battlefront II often being criticised because of ‘pay-to-win’ content and wafer-thin storylines.

However, the latest offering is meant to be a change in the tides. Star Wars Jedi: Fallen Order is a single-player action-adventure game that follows the last surviving Jedi, Padawan Cal Kestis, who is on the run from the Galactic Empire.

Set five years after Episode III - Revenge of the Sith, developers Respawn have created a Star Wars world that combines fan favourites with new, original characters, locations and creatures - of course, always under the watchful eye of Lucasfilm.

We sat down with Respawn’s Aaron Contreras, the narrative lead on the new game, to try out the game and find out what makes this one different.

Here’s everything we learnt - condensed down into 9 easily digestible points.

Star Wars Jedi: Fallen Order is available to pre-order now on PS4, Xbox One and PC, and will be officially released on 15 November.

1. It may be a one-player game, but you’re not alone

Cal Kestis is accompanied throughout the game by droid BD-1.

“BD-1 is an explorer droid that is obsessed with going out and collecting data about the world,” Contreras explains while scanning a defeated stormtrooper. “That could be an enemy that you encounter - so, when you encounter an enemy for the first time, you can get tips and some backstory on them. There’s also a data bank, that fills with content as [BD-1] scans things. It’s a little library for the game.”
And, BD-1 may be a new character, but his ‘voice’ will be familiar to any Star Wars fan. After all, he does share it with R2-D2.
“We got Ben Burtt, the original sound designer for R2-D2 and the lightsaber to do all the sounds for BD-1, so that was really cool. One of the advantages of working with a brand like Star Wars is that there is a whole generation of really brilliant creators who are sometimes available to come work on our projects.”

2. You get to visit Chewie's home planet

Kashyyyk (aka Wookiee Planet C) also features in the game.

“We wanted to show a wide range of existing locations inside Star Wars,” Contreras tells us. “Kashyyk, the Wookiee homeworld, was a really iconic location and it has a very strong theme with these massive trees.
“You also go to Dathomir, which is a very dark planet and where Darth Maul comes from. These planets give us pillars of specific kinds of tones inside Star Wars like Kashyyyk is really strong with the force because it’s a super powerful nature planet.
“Then, Dathomir is really strong with the dark side of the force and is a really nasty, dangerous place - which is great for a video game.”

3. There's plenty of original locations, too

The game is a mix of roughly 50/50 existing Star Wars locations and original locations created for the game, according to Contreras, and each planet offers a completely new challenge with the creatures and environment.

“Usually games recycle different kinds of enemies and it’s ‘this one is blue, that one is red’,” Contreras continues. “With us, when you go to a different planet, it is a whole different kind of ecosystem with different naming conventions.”

Contreras wouldn’t give an exact number of how many original creatures were created for the game, but did say it involved a lot of back and forth with Lucasfilm.
“The whole process of designing these creatures and naming them was a source of heavy iteration and conversation between Respawn and Lucasfilm,” he explains.
“At some points in the project, you are a bit like ‘we should have just put stormtroopers everywhere’, but we are fans, too. So, the opportunity to add to Star Wars by filling out all these worlds is really cool. I never get sick of naming things… because it can be silly and that’s okay.”

4. You Shouldn't Even Be Able To Tell It's Loading

“We’ve built the game to stream so as those conversations are playing out, we’re loading the next thing in the background,” Contreras tells us while we stand aboard The Mantis - a research ship.

“The approach we took when building the game was to make the experience as seamless as possible for the player. So, there is loading happening, it’s just happening while you’re in the game.”

5. You can customise your own lightsaber

And with a few exceptions that are already available at the start, all customisations are earned through playing the game. You can’t simply buy yourself a new outfit or lightsaber adaptation.
“We made quite a point of saying no to micro-transactions, which has been a constant throughout the entire process,” Contreras explains. “On the Respawn side, it was never a part of the game and there’s never been a push to make it part of the game.”

6. What a lightsaber does doesn't change

Contreras explains that one of the first elements of the game that the design team looked at was the lightsaber because it was essential in “nailing the fantasy of becoming a jedi”.

7. Using the force is more than a tap of a button

“One of the things we went back and forth on the most [with Lucasfilm] was The Force, which is unsurprising in a jedi game,” Contreras laughs. “With Cal, it was that he has the slow ability. There were a lot of iterations to try and get that right so that it felt good for gameplay but it also felt like a force ability.

“As you level up with slow, if you focus on an enemy and hold the button down, you will see Cal focus and use The Force on them. It changes the effect if you just tap the button because he will do it a bit quicker, but you will always see him strike a pose and intentionally focus his will on someone.
“That was something that Lucasfilm cared about a lot, that it wasn’t just a magic wave of the hand. It had to feel like when a Star Wars jedi used the force in previous films.”

8. There Are 10 Different Stormtrooper Personalities

“You never see [stormtroopers’] faces because their sort of ‘faceless grunts’ but we’ve got about 10 different personalities for stormtroopers,” says Contreras.“Different stormtroopers will have different conversations depending on where you are in the game because you can come back to planets later in the game.

“Some are more aggro, more gung-ho and ready to fight you, and then you occasionally come across a stormtrooper who is uncertain. ‘Oh, you’ve got a laser sword and I’m kind of afraid of you’ but they will still try and fight you - it doesn’t change that much.”

9. There are 'infinite' hours of fun

There’s a range of difficulty modes (ranging from Story Mode to Grand Master), which will likely dictate how long it takes you to play the game. Though, Contreras is unwilling to give any indication of how many hours it would take the average player.

“We try not to say ‘the game is this long’ because it’s so variable. We have a very full-featured critical path where you play through the story - that’s still a lot [of hours],” he tells us.
“But then you can still choose to go back through and find all the secrets, then that is a lot more content and a lot more gameplay. We’re definitely making this game for people who want to spend time really immersing themselves inside Star Wars.”