These nerdy Valentines Day cards could equal happiness for you 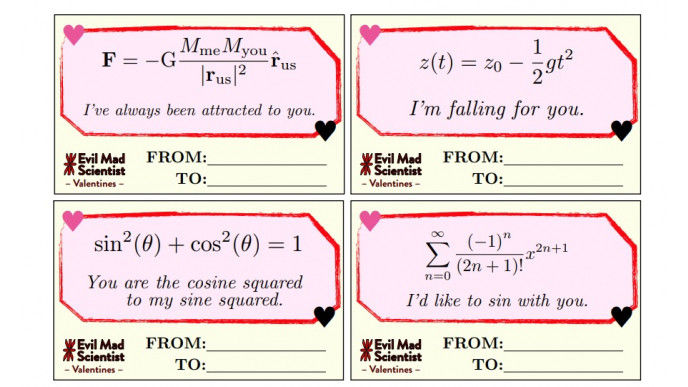 Last year we told you about Evil Mad Scientist’s alternative Valentine’s Day Cards for the nerds out there that want to express their love. Well good news earthlings! They’ve done it again, for their seventh consecutive year in fact.

Mushy ‘you’re my everything’ messages aren’t for everyone, so it’s a good job the geek market is being served with these sexy maths problems. From indecipherable messages like ’You are the cosine squared to my sine squared’ (seriously if someone said this to me I wouldn’t know if they wanted to sleep with me or fight me) and ’My love for you has an estimated MBTF over two million hours’ (is this about a sex video going viral? No idea) to simpler ones like ’I want to intersect with you’, NOW you’re talking our language.

Here’s a few below:

So if you’re stuck for what to say this year, and you’ve got the emotional output of Moss from the IT Crowd, at least now you know there’s an answer. A logical one, obviously.