Do you prefer fire or ice? 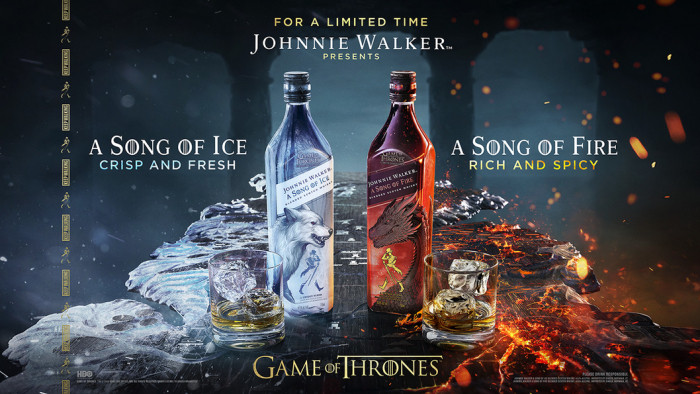 It turns out combining Game of Thrones and alcohol is a hit. Following the success of its first Game of Thrones scotch, drinks giant Diageo has partnered up with HBO again to add two more whiskies to its Johnnie Walker range.

The company, which is also behind Captain Morgan and Gordon’s, said net sales grew 5.8% in the year until June 2019, partly because of the launch of the Game of Thrones-themed whisky in October last year.

The two latest whiskies have been inspired by two of the most important houses in the show - House Stark and House Targaryen - to follow the ‘White Walker’ blend already available.

‘A Song of Ice’ - for House Stark - is decorated with a direwolf and is made using single malts from the Clynelish distillery in the northern Highlands of Scotland. According to the brand, it “exudes a crisp, clean taste like the unforgiving force of ice that shapes mountains and stops rivers”.
In contrast, the second whisky ‘A Song of Fire’ is “rich and spicy”. The bottle is decorated with a dragon to represent House Targaryen and the drink itself is said to have subtle flavours of “smoke from the peated malts of the Caol Ila distillery”.

HBO’s Vice President of Licensing and Retail, Jeff Peters, said his team were “very proud” to be partnering with Johnnie Walker again.

He added: “After seeing the excitement there was for White Walker by Johnnie Walker, we are thrilled to celebrate the end of an epic tale by offering more quality whisky for fans of the show and whisky enthusiasts to collect and enjoy.”

Fans of Game of Thrones will have a little while to wait though as, while they are launching in the US in August, they will not be globally available until October. A bottle will cost you £34 for 70cl.