Larry Davis is back where he belongs. 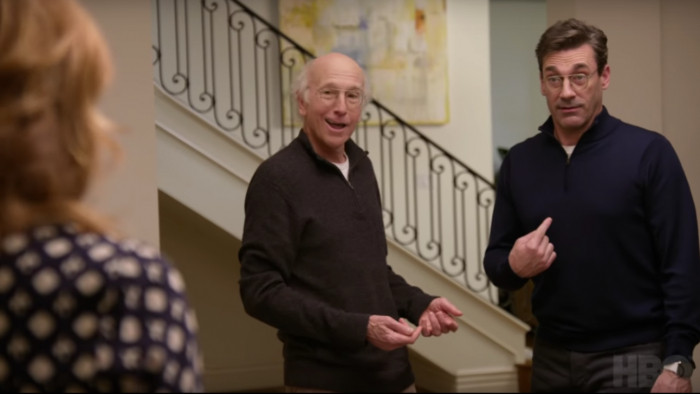 Larry is back. Yes, the trailer for season 10 of Curb Your Enthusiasm is finally here and there’s a chance we’ve already watched it 287 times. Not that we’re counting.

After a two year wait, the show is set to return, accompanied by a host of characters we can’t wait to reacquaint ourselves with.

Featuring an onslaught of F-bombs, beginning with Cheryl Hines menacingly chopping lettuce while declaring “I’m gonna fuck you up” and ending with Jane Krakowski screaming “get the fuck out, Larry”, it seems as though nothing has really changed in the confrontational world of Larry Davis.

For those unfamiliar with the admittedly vague storyline that runs throughout Curb Your Enthusiasm, Larry Davis plays a fictionalised version of himself as he pushes the boundaries of social acceptability.

There’s plenty of comedy gold to go around courtesy of his agent Jeff Garlin and ex-wife Cheryl Hines, while his friends - both famous (Jon Hamm) and non-famous (J. B. Smoove) - add a smattering of added drama to the mix.

The trailer, in all its comedic glory, confronts a number of key issues, including ‘can you take a confrontation seriously if one person is wearing shorts?’ and ‘does a top hat automatically mean your channeling Abraham Lincoln?’.

Needless to say, the return of Larry is the news Curb fans have been waiting for. Season 10 is set to air in the UK on Sky Atlantic and NOW TV in January.