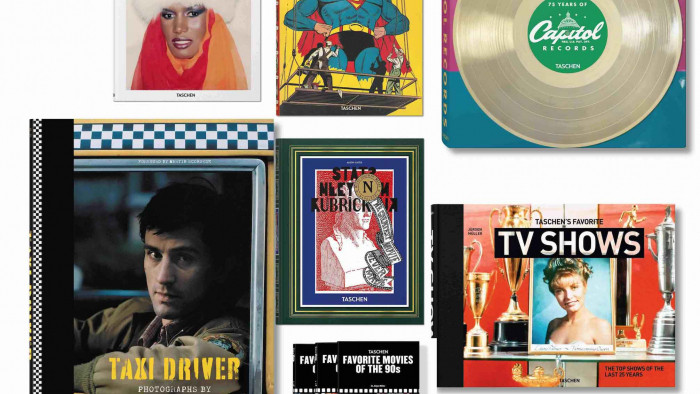 And they say Christmas only comes once a year. Looking at the books that have been discounted in the Taschen sale, this is simply not true.

The sale, which lasts from the 27-30 June, is one of the biggest the book seller has ever had. It's the time of year when they get rid of display items and those books that have a touch of damage and sell them for up to 75% off their original price.

Below are 10 books that we thinks are essential buys - whether it's because of the imagery, the writing or a mixture of the both.

All of these are coffee table reads that chart specific people and periods in culture.

It's worth nothing that while we may get a commission from the following links, each book here has been chosen by our team, purely because of their editorial quality - enjoy, and we hope you have a coffee table big enough for all of them.

1. 75 Years of DC Comics: The Art of Modern Mythmaking
£25
According to Taschen, this is "the single most comprehensive book on DC Comics with more than 2,000 images and in-depth essays by DC veteran Paul Levitz."
Buy now at Taschen
45% off!

2. Stanley Kubrick’s Napoleon. The Greatest Movie Never Made
£30
The most infamous non-film ever. Stanly Kubrick spent years trying to get Napoleon to the big screen and ultimately funding was pulled. This book is an exhaustive examination of the pre-production process.
Buy now at Taschen
70% off!

3. Favorite Movies of the 90s
£10
The 90s was a blistering decade for movies and this book charts the 10 years over 776 pages, packed with facts and stills.
Buy now at Taschen
50% off!

5. Steve Schapiro. Taxi Driver
£20
This superb book offers a look behind the scenes of Martin Scorsese's best movie, by someone who knows it best. The book is composed of on-set images by the unit photographer Steve Schapiro.
Buy at Taschen now
50% off!

6. Andy Warhol: Polaroids
£20
This book was created in collaboration with the Andy Warhol Foundation and reveals hundreds of instant pictures by the artist - from famous folks to anonymous nudes.
Buy now at Taschen
40% 0ff!

7. The Bronze Age of DC Comics
£20
This 400-page book is packed with imagery from the DC Comics archive but what's so great about it is how it tells the story of the comics and their relation to things that were happening in real life at the time.
Buy now at Taschen
75% Off!

8. Taschen's favorite TV shows: The top shows of the last 25 years
£10
This anthology charts the best TV over the last 25 years, the shows that offered the most cultural impact. At over 700 pages this is a brilliant book at a cut price.
Buy now at Taschen
45% off!

The Walt Disney Film Archives. The Animated Movies 1921–1968
£70
This is the ultimate Disney archive. It contains 1,500 images from the “Golden Age of Animation.” It also includes behind-the-scenes photos, story sketches, and cel setups
Buy now at Taschen