Your favourite silk boxers could now be produced by a goat

Not like, they have their own businesses or anything 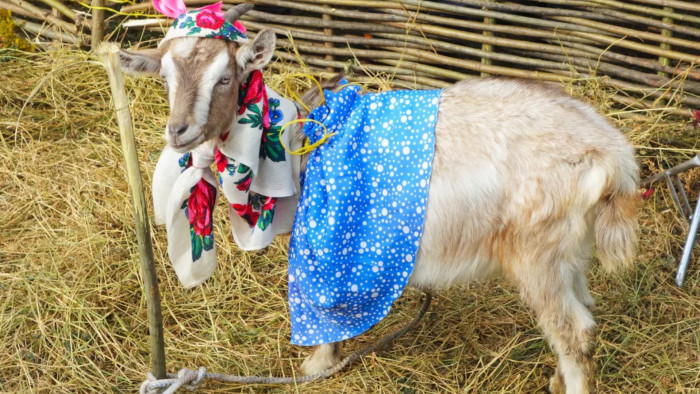 Silk is inherently luxurious. You might own some silk boxers or a silk scarf, but chances are you own something that feels like silk and didn’t cost you a month’s rent. Good news then, that goats can now produce silk. Yes, the living bin of the natural world, the goat – the animal that will quite literally eat anythingit can see – can now produce the finest of fabric for your wearing pleasure. That’s because scientists have inserted spiders’ silk-producing genes into them, and those goats produced the protein needed in their milk. I can’t help feeling these scientists must have had a lot of time on their hands. Or a lot of goats.

This weekend, speaking at the annual meeting of the American Association for the Advancement of Science (can’t imagine that’s getting much funding since Crazy And The Gang took over the White House) the director of comparative biology at the American Museum of Natural History, Cheryl Hayashi, said: “We can already produce spider silk by the kilogram. When we bring the cost down [by adding goat silk] it will have all kinds of uses, such as athletic gear and fashion clothing.”

Hopefully this is good news – the cost of fast fashion is vastly contributing to climate change, so as long as this method is cruelty free, bring it on.

Personally, I had just either totally forgotten, or totally omitted the fact, that spiders can produce silk from my memory. I thought it was just the nominative determinism of silkworms that meant they were afforded that honour. But no, spider silk is already a valuable commodity, it’s just the small matter of farming it that gets a bit tricky as Jonathan Leake writes in The Times this weekend. “Attempts to farm spiders have failed because they are so small and tend to eat each other.” Well quite. This incidentally struck me with foreboding that spiders will eventually rule us all, but that’s another article.

The new method works by freezing the goats’ milk and then pushing it through filters to extract the silk proteins that can then be transformed into silk fibres. The Times also stated that “Transgenic spider-goats created at Utah State University will probably be the main source” of the new silk. Is nobody hearing alarm bells? Transgenic spider-goats. Is Will Smith going to be in this film in fifteen years when we’re at their mercy? Sorry, again, I digress.

In the meantime, the new technology means that silk could be inserted into other organisms, bringing real silk into mass production, and the fibres could even one day be used for more useful things like “repairing ligaments” says Hayashi. So that’s something to look forward to. But for now, it probably just means you can get your silk dressing down a bit cheaper. At least you’ll look chic when the spiders finally stage their uprising, aye?