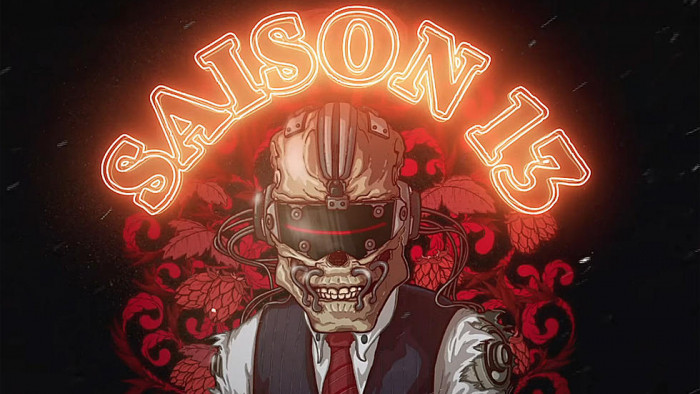 Close your eyes and picture an alcoholic beverage with the word “Megadeth” on the side. You’re probably imagining some abominable cider in an intimidating two-litre blue bottle, with the kind of percentage that makes clear that flavour is very much a secondary concern.

But actually this is a beer from heavy metal veterans Megadeth, and comes in at a far more palatable 6.1% ABV. If the idea of Dave Mustaine and his bandmates working away at a brewery doesn’t fill you with confidence, you can relax: it’s a collaboration with Canadian brewers Unibroue, who have previously made another tipple for the band, named A Tout Le Monde.

This time around, the brew is called Saison 13, and it’ll contain “13 carefully selected ingredients” for a “perfect combination of malt, fruit and spices.” We don’t know much else about it, but if you want the vicarious thrill of opening a can, the band put up a teaser on Twitter:

It’s time for an encore from @Unibroue and @Megadeth. Our NEW beer, SAISON 13. Available now in select Canadian provinces and coming soon to the US this September! ...Who’s buying? #Saison13#StrongBeer#MegadethBeerpic.twitter.com/VuzGgKKMjF

That might be as close as you get to sampling it, as it’s available in “select Canadian provinces” with a US released planned for next month. No word on a UK launch, so you’ll probably have to stick to beers without a band logo anywhere near them.

It may sound a bit weird for a band to dabble in the alcohol market, but Megadeth is far from alone in this. Earlier this year, Slipknot decided to try its hand in the whiskey market, and for beers and ales, you can turn to the likes of Kiss, Iron Maiden, Motorhead or AC/DC if you really want.

If you prefer to pick your drinks based on the taste rather than the celebrity endorsement, then you may want to consult our list of the best craft beers you can buy instead of relentlessly typing “[BAND NAME] beer” into Google. Your call.

Updated: The best gin for gin and tonic and more.
Entertainment