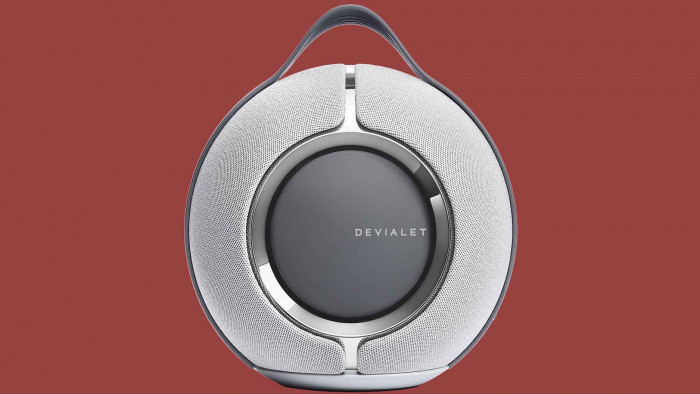 With looks that echo that of its premium - and full size - Devialet Phantom speaker range, this is one Bluetooth speaker which more than stands out.

It's not just the aesthetics that are familiar as the Mania also has similar, albeit condensed, audio smarts inside.

Inside are four full-range drivers and two subwoofers - so expect bass you can feel in your bones - which offer up 360-degree sound and Devialet notes that no matter the size of the room, or if you are heading outside, the sound will "morph and adapt" to the space it is in. This has been given the fancy name of ASC, Active Stereo Calibration.

Devialet certainly hasn't rushed trying to shrink its tech into a smaller speaker. It notes that it has taken some four years to figure out how to get its signature sound into a smaller package.

Connection-wise, you can listen to music via Wi-Fi and Bluetooth and there's Alexa on board. It is also both Spotify Connect and Airplay 2 compatible.

When it comes to battery life, there's 10 hours on board and the speaker will charge in three hours. Not the best on the market, then, but more than enough for an outside soiree.

The Devialet Mania is also a hardy speaker, with IPx4 certification, so it can certainly take on a splash or two.

Style-wise, the Devialet has a teardrop look, with the handle offering up six buttons where you can control the speaker. Size-wise it's 170mm tall and weighs 2.3kg.

You can get the Devialet Mania in black and grey, as well as a 24-karat gold-plated edition which has been made with partner Opera Garnier.