Winter is coming (but not soon enough) 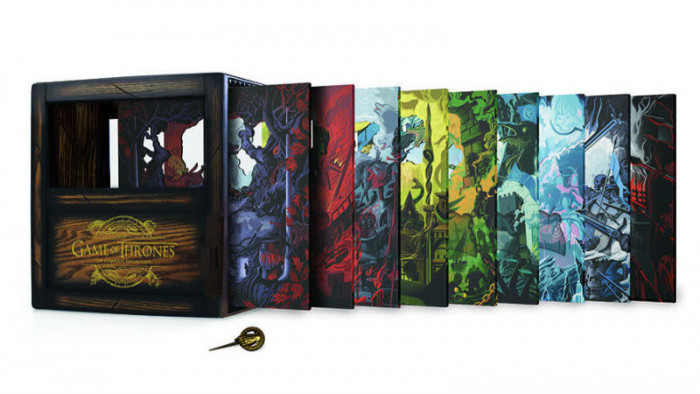 If your first thought upon finishing Game of Thrones was to immediately watch it all again, then the lack of a complete boxset is a bit of an annoyance. A minor annoyance, given it’ll take you nearly three days’ worth of solid watching to get through the first seven seasons alone, but an annoyance nonetheless.

Fortunately HBO is planning something special for its complete box set that is certainly worth the wait. Feast your eyes on the stunning complete Blu Ray collector’s edition.

Combine this with the lead image, and you’ll have an idea of how this works. The outer wooden crate makes a shadow box, and each of the eight seasons adds an extra layer to the diorama. Just make sure you put them back in the right order.

There also seems to be a neat little ‘Hand of the King’ badge holding it all together. Looks like it's detachable, too, so you can go around offering advice unsolicited advice at dealing with the Dothraki to people on the Tube.

And then there’s the content, of course. All 70 hours and 15 minutes of the show, plus five never-before-seen deleted scenes from the last season, just in case you didn’t think it was long enough. You also get over 15 hours of additional materials, including Game of Thrones: The Last Watch, a documentary exploring the making of the final season.

Perhaps the main attraction, though, is the Game of Thrones: Reunion Special: a live show hosted by Conan O’Brien, where the actors share their experiences over the last decade making the programme. You can get a sneak peek below.

So how much will this monster set you back? It’s $250 in the US, but the current Amazon UK listing has it for £299.99. Hopefully that’ll come down, especially as it has some boring placeholder artwork for the time being. It’s coming on December 3 – this year, not 2025 as said placeholder indicates.

December 2019 or 2025, it’s quite a long wait. Here’s our list of the best Netflix TV shows to keep you busy in the meantime.