It's beginning to look a lot like... ok, it's still too early. 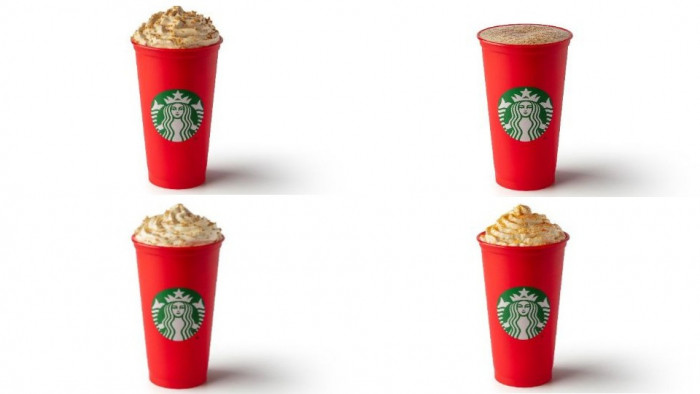 It’s the day coffee addicts and Starbucks fans alike have been waiting for; those jolly red cups are back - and what’s more, they’re doing their bit for the environment.

Available from 5 November through to 2 January, coffee fiends nationwide will be able to get their mitts on the festive reusable cups in-store - with the containers coming in at a reasonable £1.50 each.

And that’s not all, because Starbucks has also announced a new flavour addition to their line-up of festive Christmas cheer - and it’s set to be one hell of a sugar rush.

Introducing: Toasted Marshmallow Hot Chocolate - the latest addition to the hearty winter menu. A twist on the traditional Starbucks hot chocolate, the offering is ideal for those with a sweet tooth, featuring marshmallow syrup and marshmallow flavoured whipped cream.

We can feel the onset of diabetes already.

The new flavour will join a host of Starbucks’ seasonal staples - including Gingerbread Latte, Toffee Nut Latte and Eggnog Latte.

Those getting all hot and sweaty slaving over the stove this yuletide season will also be pleased to hear that the Christmas offerings are all available in iced versions - y’know, because the British winters just aren’t cold enough for some now global warming has kicked in.

What’s more, the brand are adding some veggie and vegan warmers to their menu. There’s a vegetarian brie and cran-merry focaccia on offer, alongside the new very merry vegan wrap - featuring crumbled butternut squash fritters & roasted red cabbage - and a vegan maple mustard mayonnaise in a beetroot wrap.