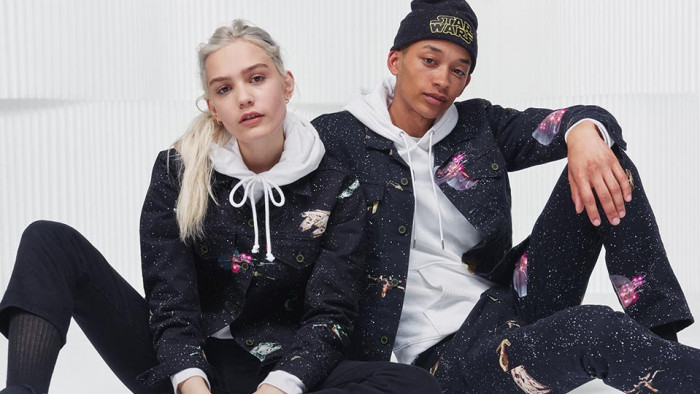 When it comes to Star Wars-themed merch, it’s pretty much a given that we’ll try and consume anything that’s sent our way. From cheese boards to full-size Stormtroopers, the sky really is the limit.

Now though, the time has come for fashionistas to rejoice, for fashion brand Levi’s has proved they really do have the force by launching a nostalgic line celebrating Lucasfilm’s epic Star Wars franchise.

Ever wanted to pay homage the force by walking around with a giant portrait of Carrie Fisher on your back? Or maybe Chewbacca’s immortal cries of “GGWWWRGHH!!!!” embroidered down your sleeves sounds is more your cup of tea?

Either way, Levi’s has it covered.

The special-edition collection is set to coincide with the release of Star Wars: The Rise of The Skywalker and features a host of the franchise’s best loved characters.

It’s an apt collaboration, given Luke Skywalker was actually wearing white Levi’s throughout the original trilogy - you’ll thank us for that titbit of information at your next pub quiz.

Levi Strauss & Co. is a brand known for its denim, so as you’d expect, there’s a lot of it on offer.

Consisting of a host of Levi’s icons and streetwear-inspired items - like Trucker Jackets and classic cut jeans - the pieces are adorned with a mixture of archival imagery and galaxy-themed prints.

The brand has even taken classic elements like Levi’s leather patches, buttons, tabs, printed pockets (alongside their famous Batwing logo) and given them a Star Wars-inspired twist.

And, as previously mentioned, the range even features slogans like “I am your father,” and “In a galaxy far, far away….,” embroidered onto the sleeves and back of some of the pieces.

“Lucasfilm and Levi’s are San Francisco neighbors. When we found out that the final chapter of the Skywalker Saga was coming at the end of 2019, we bundled up our Jedi and headed to Lucasfilm looking for Droids,” notes Jonathan Cheung, Senior Vice President of Design Innovation at Levi’s, presumably speaking metaphorically.

Enough already. If you want to get your paws on the merch (and it’s selling out fast) be sure to hop over to the Levi’s store.