Let us know your high scores 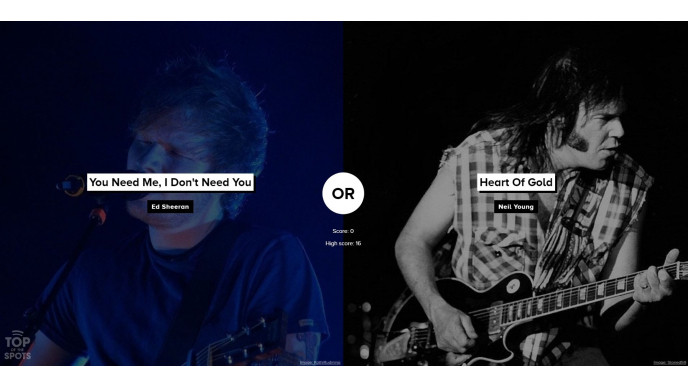 But sometimes we just want a quiz in its purest form. Yes or no. True or false. Higher or lower. That sort of thing.

People know simplicity is the key – which is how we’ve ended up with a Spotify-themed quiz which will take away hours or maybe even days of your life.

You probably have your favourite albums or artists, even if you’ve been reluctant to share your listening habits for fear of embarrassing yourself.

But what about the habits of everyone else in the world? If you’re the sort of person who’s constantly baffled by the popularity certain artists, Top of the Spots could be for you.

The concept couldn’t be more simple. You’re given two songs and you have to identify which has more streams on Spotify. It’s really that simple.

What was your guess for the Rihanna-Adele match-up? If you said Adele then we have some news for you…

It’s the sort of thing that will be diverting enough to take up your entire afternoon – before you know it, it’ll be 5:00 and you’ll have to explain to your boss why your report is late.

There are a few surprising answers, too – for example, we found an Ed Sheeran song with fewer streams than something else, while there were even a couple which outscored Pitbull and Kesha’s modern classic ‘Timber’.

Our high score so far is 16. Let us know if you can beat it.

(Images: Top of the Spots)